Home helpers will have a “historic” increase in wages in October 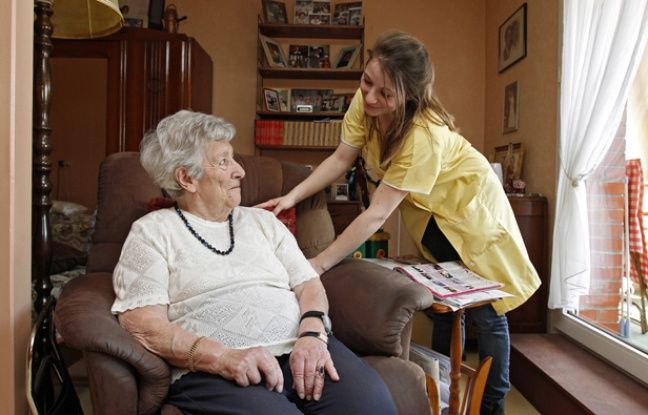 Home helpers working with the elderly and disabled will benefit on October 1 from a “historic” salary increase of 13 to 15%, announced Thursday the Minister Delegate in charge of Autonomy, Brigitte Bourguignon.

This increase, long awaited by representatives of the sector, was provided for by an amendment to the collective agreement of the branch, negotiated last year by the social partners, but which has since been awaiting the green light from the State.

It is now done: Brigitte Bourguignon “undertakes” that this amendment is validated by the end of May, for application on October 1, she said in a press release.

“It is essential to upgrade these professionals mobilized on the front line with people losing their autonomy in the fight against Covid-19, and who will allow French people to age longer at home in the future,” commented the Minister.

“We are building for the future”

” That’s excellent news ! Reacted Thierry d’Aboville, secretary general of ADMR, the main network of associations for home help. “This is a very strong message addressed to employees,” he commented, stressing that this upgrading would improve the attractiveness of the sector, which is experiencing chronic difficulties in recruiting. “We are building for the future: it allows us to provide prospects for the sector,” he said.

These salary increases represent an envelope of 300 million euros per year, the responsibility of the departments – competent in the matter -, but that “the State undertakes to cover 50%”, specified the services of Brigitte Bourguignon.

And for the “seed” period, ie the last three months of 2021, the government is proposing to increase its contribution to 70% instead of 50%.

Last October, the executive had passed an amendment to the 2021 budget for Social Security which confirmed “the State’s commitment to contribute up to 200 million euros annually to the financing, by the departmental councils, of revaluations salaries, ”recalls Brigitte Bourguignon.

“It is a hand extended to the departments, we are confident that they will seize it”, was entrusted in the entourage of the minister. “In any case, it is a necessity, the departments themselves recognize that the salaries in this sector are unworthy”, added the same source.

At this stage, however, the Assembly of French Departments (ADF) has “not accepted this proposal,” according to Le Monde. “The government cannot ask us to pay if it does not put more on the table,” Frédéric Bierry, in charge of social issues at the ADF, told the daily.

A first increase of 2.5%, also provided for in an amendment to the collective agreement, had already been released by the government in October.

This sector “too long forgotten” was until now subject to an “obsolete” collective agreement under which wages remained for many years blocked at the level of the minimum wage, the ministry observed.

With this system, “only 43% of home helpers have access to conventional remuneration higher than the minimum wage after 17 years of seniority”, the same source said.

Share
Facebook
Twitter
Pinterest
WhatsApp
Previous articleBlur on childminders, train accident in Taiwan and tensions at the Chauvin trial
Next articleAllowances, telephone bills, choice of a car… What sites to go to for information?