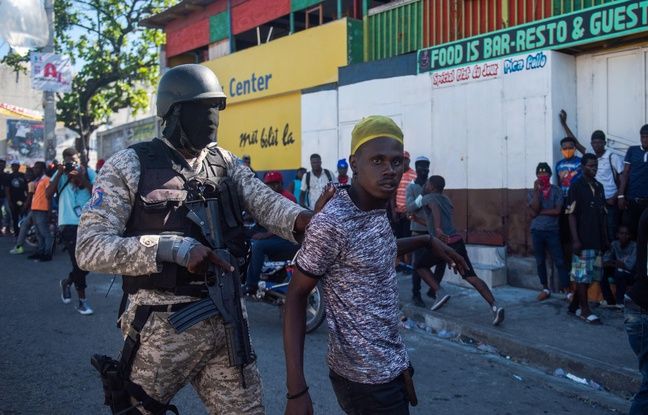 The political situation is confused in Haiti. On the one hand, the authorities announced that they had foiled on Sunday a plan for a coup targeting the disputed President Jovenel Moïse, who claimed to have escaped an assassination attempt. On the other hand, the official date of the end of the mandate of the Head of State is controversial with a gap of one year between the different versions.

Regarding the “coup attempt”, it involves a judge of the Court of Cassation and an inspector general of the Haitian national police, detailed the Minister of Justice, Rockefeller Vincent, in a press conference. Twenty-three people were arrested in total, said Prime Minister Joseph Jouthe, also to the press.

The speech of the putschists already written

“They had contacted high-ranking police officers at the National Palace whose mission was to arrest the president, to bring him to this dwelling in Petit Bois (place of their arrest in the capital) and to facilitate the installation of a new provisional president who would have made the transition ”, detailed the head of government. The Prime Minister of the country in deep crisis added that, among the documents seized, was the speech that the judge had planned to deliver to become this new provisional president, in a transitional regime. The director general of the national police, Léon Charles, also said that money and weapons had been seized, including two M14 assault rifles, a mini Uzi, three 9 mm pistols and several machetes.

Earlier in the morning, Jovenel Moïse explained that the perpetrators of the foiled coup were after his life. “I thank the person in charge of my security at the Palace. The dream of these people was to make an attempt on my life. Thank God, we haven’t seen that. This plan was aborted ”. The Haitian head of state was speaking on the tarmac at Port-au-Prince airport, surrounded by his wife and Joseph Jouthe. He then flew to the seaside town of Jacmel, for the opening of the carnival.

The power of Jovenel Moïse is increasingly contested in his country. Isolated, the president governs by decrees, fueling growing mistrust among the population. Port-au-Prince was the scene on Sunday of sparse demonstrations interspersed with some clashes with the police.

Above all, the president maintains that his mandate at the head of the Caribbean country runs until February 7, 2022. But this date is denounced by a good part of the Haitian population, according to whom the five-year mandate of Jovenel Moïse comes to an end a year earlier, this Sunday February 7, 2021. This disagreement of date arose from the fact that the president had been elected in a ballot canceled for fraud, then re-elected a year later.

Release a book, the ultimate weapon of the campaign candidate?