How did Italy come to a third wave? 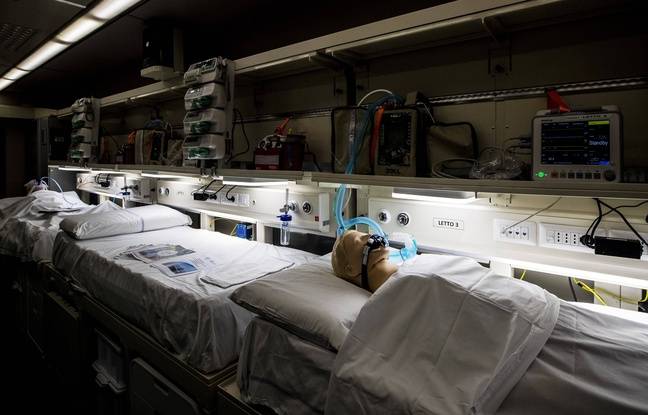 A year ago to the day on Tuesday, Italy became the first European country to enter confinement. Three hundred and sixty-five days later, the country is still struggling to see the end of the tunnel. This Monday, it exceeded the milestone of 100,000 deaths from the coronavirus, while for several days, all epidemic indicators of the coronavirus have started to rise again.

“We would never have imagined that a year later, we would have had to face the same crisis and that the official death toll would have reached this terrible threshold of 100,000 deaths,” lamented Council President Mario Draghi on Monday. How did Italy come to this situation? 20 Minutes make the point.

Is Italy undergoing a third wave?

In Italy, the number of coronavirus cases is increasing by around 30% per week, with 123,000 cases in the week of February 24 to March 2, a figure not reached since December. The R (virus reproduction rate and average number of people infected by a sick person) is estimated at 1.14. As for hospitalizations, the country has seen an average of 200 new intensive care admissions per day for ten days. In terms of mortality, the country is in an average of 300 deaths per day, constantly increasing.

“When mortality and the number of cases increase so rapidly, we can speak of a new wave,” depicts Antoine Flahault, epidemiologist and director of the Institute for Global Health at the Faculty of Medicine of the University of Geneva. He also notes that the figures “are getting closer and closer to the peak of the second wave in Italy”.

How did the country get there?

On February 1, Italy decided to reopen in most of the territory (except the most affected regions) its restaurants, bars and museums, while maintaining a curfew between 10 p.m. and 5 a.m. The World Health Organization had warned that it was “too early to relax” the restrictions because of the “still very high” circulation of the virus. At that time, the country had just over 10,000 cases per day. A figure that has almost doubled in a month.

Sufficient to explain this increase? Not that easy. Currently, the epidemic outbreak is very territorialized in Italy, with a North particularly affected and a South relatively spared. However, many observers point out that areas with open restaurants, bars and museums do not necessarily correspond to areas experiencing a strong acceleration of the virus. “It is however clear that Italy wanted too quickly to loosen the measures, while the virus was still circulating very actively. The country has never really finished with the second wave ”, raises the epidemiologist. For him, it’s a bit of a European drama: wanting to deal with a high circulation of the virus, “which is in fact likely to explode at any time”, as we were also able to see in Germany in December.

The British variant has become the majority since mid-February, a variant estimated to be more contagious than the classic strain, “which could again explain an epidemic outbreak”, underlines Antoine Flahault, but precisely, “the Italians knew about this risk and when even decided to lessen the restrictions, which is all the more precipitous ”.

But above all, Italy is not alone in experiencing a third wave. In reality, the epidemic is blazing from central Europe, and would perhaps have affected, step by step, Italy. Antoine Flahault describes a worrying situation: “When we look at a map of Europe, an epicenter of a third continental wave seems to appear in the Czech Republic and Hungary, to continue in the Balkans and now in Italy. The average number of cases of daily contamination increased by 25% in more than ten central European countries last week.

What new measures to contain the epidemic?

The Italian government is currently discussing weekend containment and a national curfew at 7 or 8 p.m. rather than 10 p.m., while betting on an acceleration of vaccination (the Minister of Health is betting on half of the population – or 30 million people – vaccinated by the end of June). Beyond these national measures, local measures will be applied.

“In Italy, health is a territorial issue,” said Beniamino Morante, a specialist journalist in Italy for International mail. Since the end of October, La Botte has been divided into zones of different colors, depending on the viral circulation, with a ban on traveling between the different regions unless there is an imperative reason. So, while part of Italy is blazing, Sardinia, it, passed this Monday in white zone, with lifting of the curfew and opening of swimming pools, sports halls, cinema, etc. “The restrictions are lifted and taken automatically”, underlines the journalist, which also explains the opening of restaurants at the beginning of February, “in reality less a political relaxation than a strict application of the sanitary protocol”.

A new color was introduced last week, dark orange, between orange and red (maximum level). In these new zones and in the red zones, teaching will be done at a distance, which should concern more than six million students according to the Association of School Directors of Italy. In all Italian areas where the incidence of the coronavirus exceeds 250 cases per 100,000 inhabitants, it would be up to the local authorities to make decisions.

Beniamino Morante describes a feeling of weariness in the country, but not a revolt superior to other countries. According to a poll published this weekend by the daily The Corriere della Sera, 44% of Italians would be in favor of new measures. They were 30%, a fortnight ago.