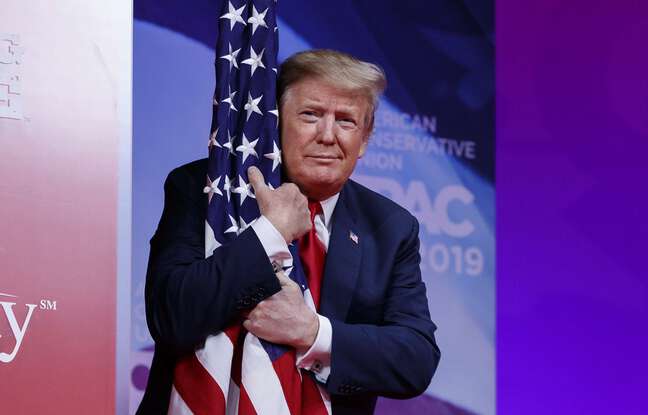 “Donald J. Trump is not going to disappear! “: It is in front of an audience dreaming of seeing him stay in politics that the former president speaks, Sunday, at the conservative CPAC conference (at 3:40 p.m., or 9:40 p.m. Paris time), for the first time since he left the White House and since his acquittal. The opportunity for him to consolidate his grip on the Republican Party with a view to a possible candidacy in 2024. And to make those who voted for his impeachment pay.

Donald Trump is the Republican Party, at least for the base

It was Ted Cruz who assured him at the CPAC conference on Friday: “There are a lot of people in Washington who would just like to erase the last four years” of his tenure “Well let me tell you something: ‘ ‘Donald J. Trump is not going to go away!’ “. At this high mass of the American conservatives, the ex-president arrives on conquered ground.

At the microphone, not Mitch McConnell or Mike Pence: the faithful of Donald Trump have succeeded in recent days. We heard the governor of Florida Ron DeSantis, Ted Cruz, Josh Hawley or even the eldest son of the former president, Donald Jr, denounce in bulk the “cancel culture”, “the socialism of Alexandria Ocasio-Cortez” and Joe Biden’s open border policy. No wonder then that 74% of Republicans want Donald Trump to continue playing a political role, including 48% in favor of remaining the party boss, according to a poll for CNBC.

Barring a major surprise, Donald Trump should not officially declare himself a candidate for 2024 this Sunday. But according to leaks revealed by Axios, the former president could present himself in his speech as the “presumptive nominee”, just to calm the ardor of half a dozen ambitious Republicans who dream of taking up the Trumpist torch, like Ron DeSantis or Kristi Noem, the Governor (South Dakota) going up.

Republican sentiments towards Trump running in 2024 have warmed since January: 55% of GOP🐘+Lean voters now want to see it happen, compared to just 45% in January. pic.twitter.com/fRcLgh2jwi

According to the Echelon Insights barometer, after a drop following the attack on the Capitol, Donald Trump rebounded in February: 55% of Republicans want him to represent himself.

Revenge to the midterms

According to gossip relayed by CNN and the New York TimesDonald Trump has spent a lot of time surrounded by his personal guard in recent weeks at his headquarters in Mar-a-Lago, Florida. Among the faithful: his ex-advisor Stephen Miller, architect of the muslim ban, his community manager Dan Scavino, his spokesperson Jason Miller and his ex-campaign manager of 2016 Corey Lewandowski. House Republican boss Kevin McCarthy, on a chill with Donald Trump after an explosive phone call during the Capitol attack, has also come to Florida to pick up the pieces.

Donald Trump would be animated by a desire for revenge, and wants to make pay all the elected Republican who voted in favor of his impeachment in the House and to condemn him in the Senate. With a formidable weapon: to support competitors for the primaries which will precede the midterms of 2022. Illustration in Ohio where the representative Anthony Gonzalez, one of the 10 Republicans who voted for impeachment, must face the Trumpist Max Miller. Deprived of Twitter, Donald Trump issued a statement Friday evening assuring that Miller “is a wonderful person who has done a superb job in the White House and will be a fantastic member of Congress.” It remains to be seen whether his support will have as much impact as during his presidency.