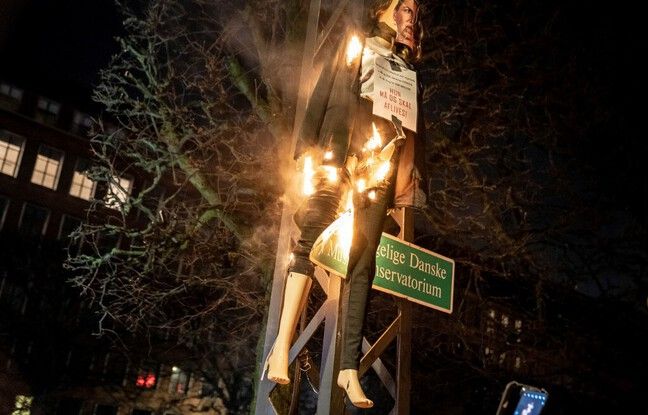 Some 600 people walked the streets of Copenhagen on Saturday evening to protest against the anti-coronavirus measures taken by the Danish government, including the future vaccine passport. Headed by the “Men in Black Denmark”, an active group on Facebook which has been organizing rallies for more than a month, the demonstrators met in front of the parliament to support “freedom of choice” and denounce the ” coercion ”and the“ dictatorship ”of the anti-Covid semi-containment in place in Denmark.

In freezing cold, the rally, in which children participated, aimed to protest in particular against the “corona passport”. Like other European countries, Denmark will develop an electronic certificate of vaccination against Covid-19 intended for travel and potentially used to access sporting or cultural events, or even restaurants. For the “Men in Black”, the creation of this “passport” entails in fact an obligation to be vaccinated and therefore a further restriction on individual freedoms. In Denmark vaccination is recommended but not compulsory.

In the light of the smoke, the demonstrators, some of whom were hooded, marched with torches in the center of the Danish capital chanting “We have had enough!” “Or” Freedom for Denmark “. Participants held up a portrait of Danish government chief Mette Frederiksen as North Korean dictator Kim Jong-un. Despite the radical tone of demonstrators, most of the parade, which was authorized, took place in peace, with a large police force.

Two weeks ago, a similar event was marked by the burning of a mannequin bearing the image of the Prime Minister. Two men have since been detained, prosecuted for “threats” against Mette Frederiksen. The emergence of the movement, even if the demonstrations remain limited to a few hundred people, raises fears of radicalization. Non-essential shops, bars and restaurants are closed right now in the Scandinavian country of 5.8 million people and the government has extended restrictions until at least February 28. Primary schools may however reopen on Monday.

With an esplanade in his name and a concert, the capital commemorates Johnny this Tuesday