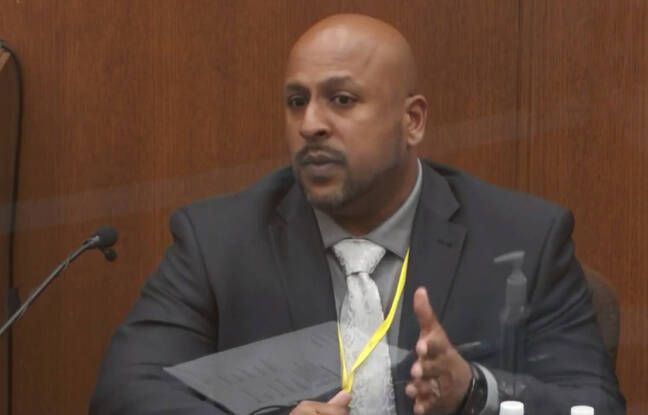 What did George Floyd scream before “I can’t breathe”, while Derek Chauvin had his knee on his neck? Wednesday, on the 8th day of the trial of the ex-police officer, in Minneapolis, a sentence hardly audible was the subject of a fierce battle between the lawyers. And it is the jury that will have to decide whether George Floyd confessed to having “eaten too many drugs”, as the defense argues, or that he had “not taken drugs”, as assured by the prosecutor’s office. .

James Reyerson, the Minnesota Bureau of Criminal Apprehension agent who oversaw the investigation into Floyd’s death, was called to the stand by the prosecutor. During his cross-examination, the defense played him a short excerpt recorded when George Floyd had just been pinned to the ground by the police. “Does it seem like Mr. Floyd is saying ‘I ate too many drugs'”, asks Eric Nelson. “Yes, it looks like”, replies the witness.

But in the process, the prosecutor makes him listen to a longer extract and the agent corrects himself: he thinks that George Floyd said “I ain’t do no drugs”. Big difference. pic.twitter.com/LYYR36Slsv

After an interruption, the prosecutor counterattacks. He plays the officer back to a longer excerpt, with the phrase in question ending with “please, I can’t breathe”. “Did you get to hear what Mr. Floyd was saying?” », Asks the prosecutor. “Yes, I think he said ” I ain’t do no drugs ””, corrects the witness. Either “I didn’t take drugs”, with a contraction “ain’t”, here for “do not”, followed by a double negation, a construction commonly used in English by many African Americans.

Even when listening again, it is difficult to decide with certainty. But like have reminded many personalities black Americans, nobody, in English, says “eat drugs” (but “do” or “take” for “do / take drugs”).

This is an important point because since the start of the trial, Derek Chauvin’s lawyer asserts that George Floyd “swallowed drugs to hide them from the police” just before his arrest. And states that it was this drug, coupled with heart disease, that caused his death. Judge Cahill allowed the defense to show video of a 2019 arrest of Floyd in which he told officers he ingested pills of Percocet, a strong pain reliever, asking to be taken to hospital.

At the stand, two members of the forensic science of Minnesota then testified that pills had been found in the car driven by George Floyd. And another pill containing his DNA (saliva) was found months later during a second inspection requested by the defense in the police vehicle. At first, Derek Chauvin’s colleagues forced George Floyd into the back of their car. But as he struggled, claiming to be claustrophobic, officers pulled him out and then pinned him to the ground.

These pills contained methamphetamines and fentanyl, a potent opioid. Both of these substances have been detected by forensic testing with a potentially dangerous level of fentanyl. But many doctors believe that George Floyd, who resisted, alert, for about fifteen minutes, showed no symptoms of an overdose. This point should be fiercely debated next week by medical experts called to the bar by both sides.