“I found my way” … At Afpa, young school dropouts are rediscovering their potential 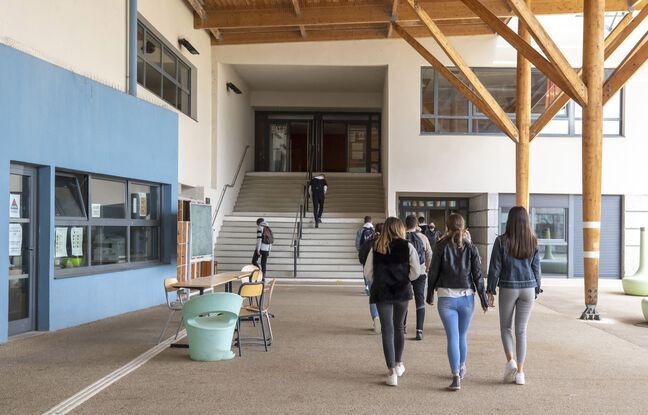 A classroom in the 11th arrondissement of Paris. Young people aged 16-17 seated. An adult at the blackboard. Despite appearances, we are not in a high school but in a center of Afpa, a professional training organization. For a few months now, it has been welcoming a new audience all over France: young “dropouts”, teenagers who are neither in school nor in vocational training. The goal is to re-motivate them and help them realize an employment or training project.

Since September 2020, anyone aged 16 to 18 has in fact a “training obligation”. The local missions were therefore responsible for identifying young people in difficulty (prolonged absences from high school, sudden departure from a training center for apprentices, foreign minors, etc.) and then directing them to the Afpa system, called “Promo 16-18”. Since its start at the end of 2020, around 3,000 young people have been included in the program, funded by the State, which is to train 35,000 dropouts by 2022.

This Wednesday, there are about fifteen seated around the table in these Parisian premises of Afpa. Some have been here for a short time, others are nearing the end of the 13 week program. Today’s exercise is the same for everyone: learning to value yourself. In front of the board, Eugenie, the trainer, indicates the rules of the game: “You are going to complete the following sentence:” I am someone who … “by explaining your talent”.

After a few minutes of reflection, the young people get started. “I am someone who is sociable,” says Mamadou. There, for example, we are in a group. If someone is away, I will come and see him ”. “I am someone who likes success, assures his side Abdallah. When I have to do something, if it doesn’t work, I go crazy. I never let go of what I undertake ”.

“Learn other than with notes”

Attentive, Eugenie listens to each answer and motivates her small group: “All these qualities – courage, perseverance, sociability – will help you in your everyday life, but also when you make your CV”. The atmosphere is far from being that of a classic classroom, where a teacher would come to give his presentation. Here, everyone is empowered and invited to take charge.

“We do not have a teacher-student relationship with them,” confirms Vincent Cristia, Deputy Director General of Afpa. We treat them like adults, and that’s something that is hugely appreciated ”. “At the beginning, they have the impression that there is only the National Education which can transmit knowledge, supports Aurore Dardol, person in charge of the“ Promo 16-18 ”. But little by little, they realize that they can learn other than with class notes and ringtones. “

60% “positive exit” from the program

During the 13 weeks of the program, Afpa offers them “à la carte” workshops, according to the desires or tastes of each young person: development of a CV, simulation of an interview, reinforcement of certain skills. They can also benefit from the technical platforms of the organization to discover the reality of several trades: hotel and catering, early childhood, fiber trades, IT … The only requirements are respect for schedules and the group in which each “dropout” is located.

The results of this method? Rather good, according to Vincent Cristia. “Out of 600 young people who have already completed the course, 360 (60%) have experienced a positive exit, that is to say they have found a job, an apprenticeship, civic service or even a contract. help. 120 young people (20%) have followed all the workshops but have not yet found an outlet. And 120 others gave up along the way ”.

El Hadj is one of the “good students”. Arrived alone from Guinea-Conakry a few months ago with the project of being a footballer, he quickly became disillusioned and found himself with nothing. “I was spotted by an association that helped me and referred me to Afpa,” he says. I became interested in the profession of baker, and I found a boss who will welcome me from September ”.

For Andrea, aged 17, it will be an apprenticeship in the medico-social secretariat. She had left high school last year “because my religion – Adventism – wouldn’t allow me to go to class on Saturdays and my school wouldn’t take that into account.” With Afpa, “I found my way,” she rejoices. Here, we are not forced to do. It’s up to us to work, to apply ”.