“I’m waiting for the reopening”, “they just had to adapt”… The French split between supporting small businesses or taking advantage of Black Friday 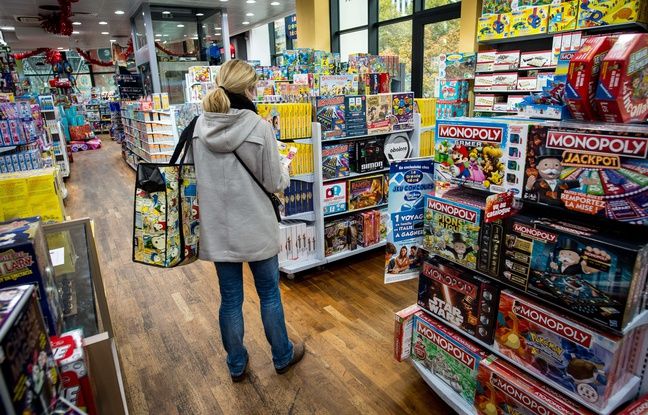 How and where do the French go to buy their Christmas presents? While announcements of discounts of – 50, – 60, or – 70% abound on the Internet as Black Friday approaches, scheduled for November 27, small shops may remain closed on that date. And fear that the French overwhelmingly favor e-commerce platforms, such as Amazon, for lack of being able to do their shopping in stores. According to the federations of traders, this shortfall in turnover at this time of the year would sign the death sentence for many of them.

Faced with this observation, citizens have decided to do their Christmas shopping only around their homes. Thus, Nathalie, who answered our call for testimonials, chose her gifts according to the traders in her town, and not the other way around. “The children will have books from the independent bookstore, a niece will have a Nespresso coffee machine bought from a household appliance store. Jewelry, other accessories and delicatessen will come from independent shops as well. “

“The urgency is always to support those who need it most”

A trend observed since the first confinement, underlines Pascale Hébel, director of the Consumption and Business division at the Research Center for the Study and Observation of Living Conditions (Credoc). “A large part of the French said they were going to change their consumption habits, and in particular turn to local shops. “

This choice is not only motivated by a desire to save the French economy, but also has a human dimension. “Today, it is the traders near us, those whose children are educated in the same school as ours, those whom we sometimes know personally, who suffer,” explains Philippe. The urgency is always to support the one who needs it most. “

“My gifts will be different, see given in offset”

Out of solidarity, Ange therefore decided that this year, unlike the previous ones and whatever happens, he would buy absolutely nothing online: “My gifts will be different, or even given in offset depending on the date on which the small traders will reopen”. But if this famous reopening date were to be delayed, it could seriously compromise the number of packages under the tree. “For the moment, the French are showing intentions, but there is also the practical side. Many will be afraid of not having the gifts on time, ”warns Pascale Hébel.

A concession that Aurélie says she is ready to make. “I will certainly have more difficulty to recover the gifts on time and I may not find everything, admits the one who decided for the first time, since 2013, not to participate in Black Friday. But the most important thing for Christmas is to be together and to share a friendly moment ”. Same resolution for Sam, a former Black Friday fan. “In view of the crisis, I no longer think the same thing and I will act differently, because small businesses are the life of a city center. If they are no longer there, he dies, he explains. So I am patiently awaiting the reopening of our stores. “

“I don’t want to ruin myself or deprive my children”

To help merchants, Sam even plans to increase his gift budget this year. A nice gesture that unfortunately many cannot or no longer afford. “This year, spending for Christmas will be much lower,” announces the director of the Credoc consumption division. Savings are exploding because the French anticipate a drop in purchasing power and no longer have confidence in the future. “

Nadège is an employee of a so-called non-essential business and would like to show solidarity with her bosses and colleagues. But this mother of four simply “can’t afford it”. “My husband is the only one working during the pandemic. I don’t want to ruin myself or deprive my children of Christmas, so I would take advantage of Black Friday on the Internet ”. For others, the question does not even arise and the choice is quickly seen. “Frankly, why miss out on such a financially interesting day? »Asks an anonymous reader.

After all, is it really up to the consumer to act in this situation? “I should buy things a lot more in solidarity when I don’t already get a lot?” asks Antoine. I think it’s up to the state to do something. “Between the first confinement, the curfew, the restrictive measures and the second confinement, it becomes complicated to impose further deprivations on yourself. “It’s already hard enough psychologically, so if I can’t take advantage of the Black Friday offers, well I’ll go crazy,” says Idriss.

And even if the stores are authorized to reopen quickly, Pascale Hébel recalls that the main concern of the French remains the virus. For an Internet user, online shopping “seems more reasonable” than going to “play crowding with small traders”.

“If traders do not adapt, in the end it is their problem”

Finally, some of our readers justify themselves in a completely different way. “They just had to adapt,” Jimmy says, without mince words. If traders don’t adapt, ultimately that’s their problem. We did not keep our horses and carriages in solidarity with the farriers. “For its part, Mantae, who claims to make purchases only on the Internet for twenty years, assures that” it would perhaps be necessary that the so-called “small traders” start to reinvent their way of working, and especially their prices “.

It is also those “who knew how to address the new generation and new tools” who will survive, according to Marie, who ensures that she makes her purchases in local shops almost exclusively online with those who have a Facebook or a Instagram. Problem: François Asselin, President of the General Confederation of Small and Medium-Sized Enterprises (CPME), assured last November that click & collect “would only represent 25% of the activity” of businesses, “in the best of cases”.