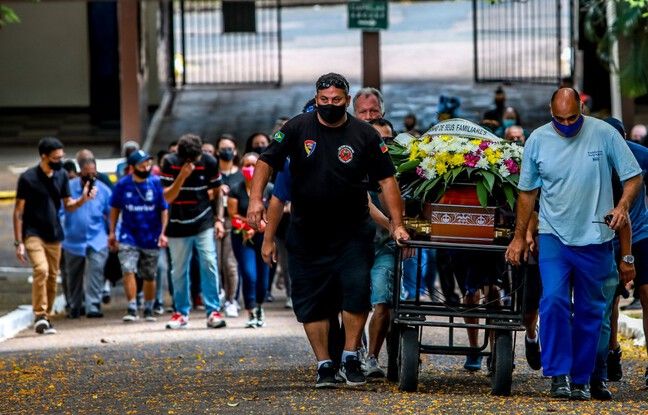 The emotion was perceptible this Saturday in Porto Alegre, in southern Brazil, at the funeral of Joao Alberto Silveira Freitas, a black man who died after being severely beaten by white security agents from a Carrefour supermarket. “It’s an immense sadness, I do not wish that to anyone, I find it difficult to hold back my tears”, testified João Batista Rodrigues Freitas, the father of this Brazilian of 40 years killed Thursday evening, on the eve of the National Day of Black Consciousness.

In the presence of around forty people, he was buried in a sober ceremony full of meditation. On the coffin, a blue flag of his favorite football club, Sao José, of which he was a staunch supporter. “I hope that all the emotion that his death aroused will ensure that our society improves (…), that we teach the principles of equality on the benches of the school”, launched his dad.

The unbearable footage from a video showing the victim punched by a security guard in the supermarket parking lot while the other held him shocked Brazil. According to the first elements of the investigation, he was severely beaten for more than five minutes before being immobilized by his attackers and dying of suffocation.

This Saturday, at the start of his speech at the virtual G20 summit, far-right President Jair Bolsonaro once again ignored the serious problems of structural racism that plague Brazil, a country where more than half of the 212 million inhabitants are black or mixed race. “As a man and as a president, I see everyone of the same color: green and yellow (the colors of the flag of Brazil)”, he said, reiterating remarks posted on Twitter the day before. , when he said he was “color blind”.

– Let us not be manipulated by political groups. As a man and as President, I am colorblind: they all have the same color. There is no better skin color than the others. There are good men and bad men. It is our choices and values ​​that make the difference.

Friday, its vice-president Hamilton Mourao, had also caused an uproar by affirming that there was “no racism in Brazil”. “We know how difficult it is to raise awareness, because the enemies of the fight against racism are in power at the moment,” said Matheus Gomes, elected (Left) to the legislative assembly of Porto Alegre, present at the funeral.