In Brussels, police forcefully disperse a forbidden gathering in a park 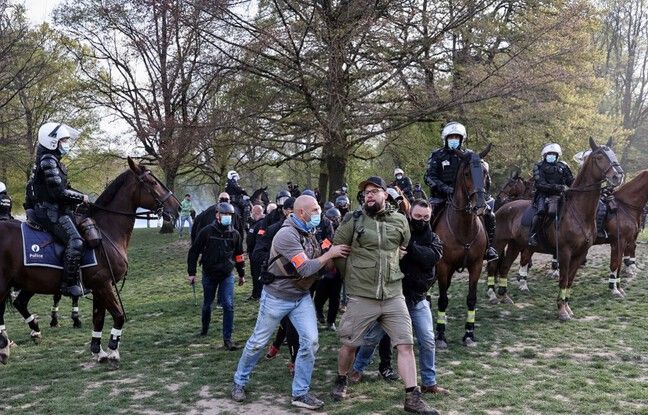 The Belgian police intervened in force late Saturday afternoon to disperse more than a thousand people who had come to participate in a party in a park in Brussels, despite the ban by the authorities. A dispersal order was given shortly before 6 p.m. “on the grounds that sanitary measures were not respected”, announced the Brussels police.

The police then used water cannons and tear gas, causing crowd movements, AFP journalists noted. During the intervention, one person was injured by the jet of a water cannon and two police officers were slightly injured, said the mayor of Brussels, Philippe Close in the early evening.

There were about fifteen arrests, according to the elected official, while a hundred people were still facing the police in riot gear around 8 p.m.

According to the crisis center, between 1,500 and 2,000 people were present on the lawns of Bois de la Cambre at the height of the gathering around 5 p.m. There was a hard core of “700 demonstrators” under the eye of many curious and strollers, qualified an official source with AFP.

The gathering had started in a good-natured atmosphere under the sun. “We are here to defend our freedom. The mask ? No, I don’t wear any more, I want to be free, ”an 18-year-old high school student who came from West Flanders with his girlfriend told AFP.

#BREAKING #Belgium #Brussels:
People gathered in Bois even if it is forbidden.The La Boum 2 festival which is expected to take place in Bois de la Cambre on 1 May, has not received any authorisation from authorities #BreakingNews #Watch #Video @Be_Osint #Brussels pic.twitter.com/m7RWKM0tiW

“One year that we cannot go out”

“It’s been a year since this last. A year that you can’t go out. After a while, you have to find alternatives, ”argued Mex, a 21-year-old Brussels woman, behind a black mask. As several groups danced around small portable speakers, the tension escalated with the arrival of a police van in the middle of the lawn shortly after 4 p.m.

The cries then burst out: “Freedom, freedom! “. Then the detonations of firecrackers and the throwing of projectiles pushed the vehicle to turn back.

Launched on social networks, the invitation to “La Boum 2” echoed a first gathering which had surprised by its scale and degenerated into incidents on April 1, the water cannons having responded to the throwing of projectiles against the police.

Result: more than 600 police officers had been mobilized against this forbidden gathering because of the anti-Covid measures in force. Throughout the week, the police and the prosecution repeated that the participants were liable to prosecution. At the request of the authorities, Facebook had withdrawn Thursday the page announcing the event organized by the collective “The Abyss”.

“Do not fall into this trap”, urged the Prime Minister

“Do not fall into this trap, it is a trap,” Prime Minister Alexander De Croo had launched on Friday, calling for a press conference not to go to Bois de la Cambre.

“This kind of events are organized by some with the aim of destabilizing”, had accused the Flemish liberal leader.

Saturday evening, Philippe Close regretted the excesses, arguing that “a dozen” other demonstrations in the Belgian capital took place peacefully on this Labor Day. “Everyone is fed up, but the vast majority of people continue to respect the measures,” said the elected socialist.

Protest demonstrations against the restrictions took place in several other Belgian cities, notably in Liège where a march brought together a thousand people.

Belgium had 2,707 hospitalized Covid patients on Saturday, including 854 in intensive care, according to official data. The pandemic has killed 24,230 people in this country of 11.5 million people.