In Germany, far-right strongholds are the most affected areas 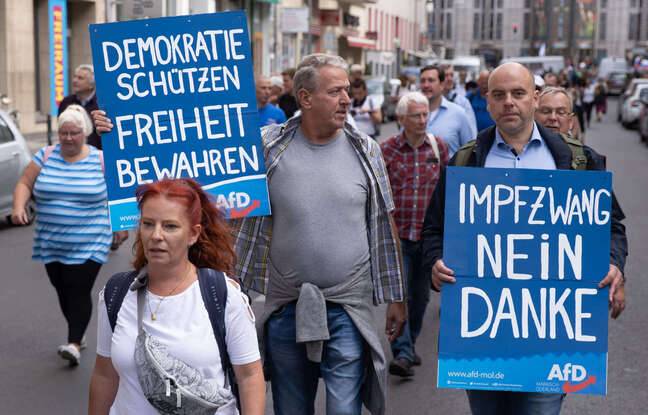 Coincidence or correlation? The areas most affected in Germany by the second wave of the pandemic are strongholds of the far right, opposed to restrictions and sensitive to conspiracy theories.

“It is striking to note that the regions most affected are those where the AfD vote was the highest” during the last legislative elections in 2017, summarizes the government commissioner for the former Eastern Länder, Marco Wanderwitz, himself. even from Saxony.

Not necessarily the only explanatory factor

This state-region of the former East Germany is the most emblematic case. It has the highest incidence rate in Germany, reaching 319.4 per 100,000 inhabitants on Tuesday, when the federal average is 114.2, according to the Robert Koch institute. This same Land had placed the Alternative for Germany (AfD) in the lead in 2017 (27%), and gave the far-right party its best federal score. A team from the Institute for Democracy and Civil Society, based in the neighboring region of Iena, has just launched a study on the “strong and very significant statistical correlation” between voting for the AfD and the intensity of the pandemic, announced on Twitter its director, Matthias Quent.

“There could be factors that explain the high results of AfD and at the same time high incidence values,” without this correlation being the only explanatory factor, however, warns this researcher.

The proportion of elderly people and large families, the presence of cross-border workers and the organization of the healthcare system, which differs according to the Länder, also influence the dynamism of the pandemic.

Among German parties, however, the AfD is the only one to have displayed its skepticism, even its opposition to the restrictions. Its deputies were reluctant in the precincts of parliament to wear the mask, compared to a “burqa for all” by one of their own.

More than one in two AfD voters (56%) consider the restrictive measures excessive, according to a recent Forsa poll. And the links are numerous with the German movement of “free-thinkers”, which brings together in regular demonstrations a motley assembly of opponents to vaccines, militant conspirators and supporters of the far right.

Nearly a third of these demonstrators would like to vote for the AfD in the 2021 elections, reveals a study for the daily FAZ. In Saxony, the health situation has deteriorated to such an extent that the authorities announced severe restrictions on Tuesday, with the closure on Monday of schools, daycares and many shops.

In this region, cradle of the Islamophobic movement Pegida, “corona-skepticism” finds a wide echo, including among medical personnel and among economic decision-makers. In Bautzen, the first taxpayer, Jörg Drews, director of a construction company, financed conspiratorial publications, according to the public channel ARD. Saxony is not the only one affected by this phenomenon.

The district of Regen in Bavaria had the highest incidence rate in all of Germany on Tuesday, at 578.7. He also offered three years ago his best score in Bavaria to the far-right formation, more than 16%.

In North Rhine-Westphalia, the city of Gelsenkirchen, where the AfD had its highest score in this most populous Land in the country, the incidence is three times higher than in the metropolis near Münster (169 against 56) . Conversely, the constituencies with the lowest infection rates, mostly located in Schleswig-Holstein (north) vote less than 8% for the far right.