In the race for governor, a candidate campaigns with a bear 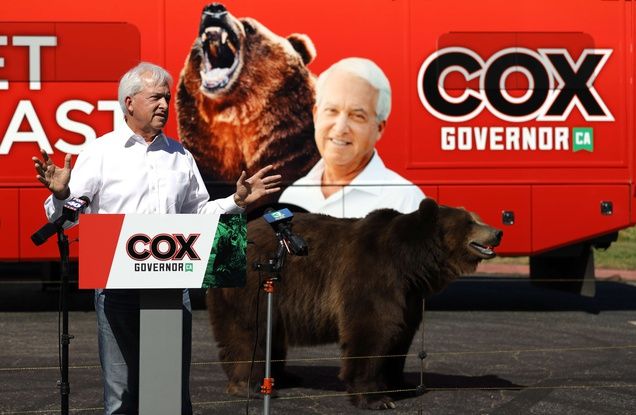 To hope to sit in the chair of the governor of California, Republican John Cox is leading an astonishing campaign. The candidate caused a sensation on Tuesday by inviting a brown bear to a meeting in Sacramento, the administrative capital of the state. He hopes to make people talk about him while many Republicans are in the line to replace the current governor, threatened with dismissal in a forthcoming referendum.

John Cox has decided to campaign on the theme of “beauty and the beast”, “beauty” being for him the democratic governor Gavin Newsom, known for his Hollywood smile and his physique of cinema, while he himself introduces himself. like “the beast” which will shake up the Californian political routine. Choosing a brown bear is not trivial, however. The animal is indeed the symbol of California and features prominently on its flag.

For his publicity stunt, John Cox used a kodiak bear, considered the largest bear species. In this case, it is an animal called “Tag”, approximately 500 kg, born in captivity and trained to appear in films and series. Visibly placid in character, Tag was content on Tuesday to wait patiently for the end of John Cox’s speech, nibbling on treats given by his trainer or making his toilet with great licks.

John Cox’s idea was not to everyone’s liking, however. The use of the bear for political and advertising purposes has been strongly criticized by animal rights activists, such as the organization PETA, which has deemed “unfortunate and shameful that Tag the kodiak bear was exploited in this way”. “The bears must be left in peace, not held in an enclosure on asphalt and transported to events,” responded the NGO, urging “anyone with an ounce of decency to leave wild animals out of their advertising operations” .

No date for the ballot yet

The number of signatures required to hold a referendum on the dismissal of Governor Newsom has been reached. No date has yet been set for the poll, which will have to ask state voters whether they want to replace Gavin Newsom and if so, by whom. It is thanks to such a referendum that the star Arnold Schwarzenegger was elected in 2003 as head of the most populous state in the United States on behalf of the Republican Party. But this time around, polls and experts believe Gavin Newsom should be able to keep his post, as California voters overwhelmingly voted for the Democratic camp in the last election.