International justice confirms on appeal the life sentence of Ratko Mladic, the “Butcher of the Balkans” 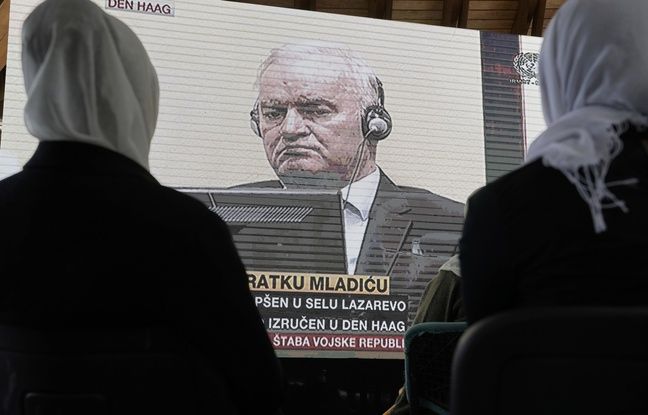 International justice confirmed on appeal the life sentence of the former Bosnian Serb military leader Ratko Mladic on Tuesday for genocide, crimes against humanity and war crimes committed during the Bosnian war from 1992 to 1995. “The appeals chamber upholds life sentence ”against him, the Hague-based Mechanism for International Criminal Tribunals (MTPI) said in a statement. The former general had been convicted in particular of genocide for his role in the Srebrenica massacre, the worst in Europe since World War II.

The verdict, delivered by five judges of the MTPI, which took over from the International Criminal Tribunal for the former Yugoslavia (ICTY) after its closure in 2017, is final and can no longer be the subject of a call. The mothers of some of the 8,000 Muslim men and boys killed by Bosnian Serb forces in Srebrenica in 1995 made the trip to The Hague.

“It is a historic day, not only for us mothers, but also for the whole of the Balkans, Europe and the world,” Munira Subasic, president of one of the associations of “Mothers of Srebrenica”. Ratko Mladic, nicknamed the “Butcher of the Balkans”, almost 80 years old, “is a monster who has not repented of what he did, even after 26 years”, she continued before the MTPI, upstream of the verdict. “Wherever their army came, wherever they set foot, they committed genocide,” she added.

At the Genocide Memorial Center, near Srebrenica, a giant screen broadcast Tuesday the testimonies of survivors and families, near the perfectly aligned white stelae where the bodies of more than 6,600 identified victims lie. “Instead of rejoicing with my grandchildren, I came here to cry,” said Munevera Kabeljic, 69, near the graves of her husband and sons, who were killed at the age of 17 and 20. “What hurts the most is that they deny the genocide,” she added. “They say it didn’t happen, but these tombstones prove it,” she continued.

Arrested in 2011 after 16 years on the run, the massive soldier Ratko Mladic, in detention in The Hague, is today an old man who suffers from health problems, according to his lawyers. More than a quarter of a century after the conflict, the former general retains an aura of heroes among his family, but his name will remain associated with the crimes of the Bosnian war, from the siege of Sarajevo to the Srebrenica massacre. Footage from the time shows him handing out candy to children in Srebrenica, then put on buses with the women, while the town’s men and teenagers were driven into a forest and executed.

Mladic was also found guilty of orchestrating a wider campaign of “ethnic cleansing” to drive Muslims and Bosnians out of key areas to create a Greater Serbia in the former Yugoslavia, torn apart after the fall of communism. Mladic, still considered a defender of the Serbian people by many Bosnian Serbs, claimed that he had been drawn into the conflict despite himself from the start of the war in Bosnia (1992-1995), which left some 100,000 dead and 2.2 million displaced people. According to his lawyers, there is no connection between the former general and the killings that were committed in Srebrenica and the charges of genocide which earned him a life sentence are unfounded.

In August 2020, during the appeal trial, Ratko Mladic declared that the tribunal was a “offshoot of the Western powers” and claimed to be still “a target of the NATO alliance”. The exact age of the former general is debated, telling him to have been born on March 12, 1943 while the MTPI held on March 12, 1942.

Ratko Mladic is one of the main leaders tried by international justice for crimes committed during the wars in the former Yugoslavia, besides the former political leader of the Bosnian Serbs Radovan Karadzic, sentenced to life in prison in 2019, and the ex-Yugoslav President Slobodan Milosevic, who died in his cell in The Hague of a heart attack in 2006, before his trial was completed.