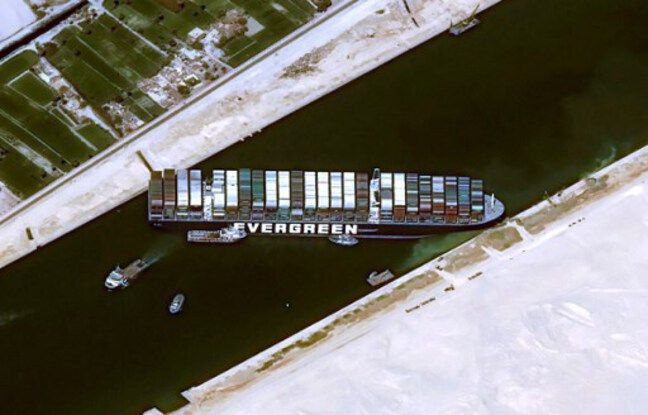 Russia took an ironic tone on Thursday, touting its northern sea route as an “alternative” to the Suez Canal in Egypt, a key trade route between Europe and Asia, where shipping is blocked by a giant container ship .

Russian President Vladimir Putin has long promoted this route, which links the Atlantic to the Pacific along the Siberian coast and is the shortest route from Asia to Europe, as a competitor to the Suez Canal. And Russia seized the opportunity on Thursday to recall it.

The Ever Given, a ship weighing over 220,000 tonnes, which was heading to Rotterdam from Asia, ran aground overnight from Tuesday to Wednesday, shortly after entering the canal, not far from the city of Suez , by blocking navigation.

The Russian nuclear agency Rosatom quipped Thursday on the situation, advancing three reasons to “consider the northern sea route as a viable alternative to the Suez Canal”. The first is, according to Rosatom’s Twitter account in English, is that the Russian Arctic route has more “space to draw original images using your giant ships”. This claim was accompanied by a link to an article reporting that the giant ship drew some sort of male genitalia on the water before it ran aground in the canal.

If a boat is stuck in the ice on the Northern Sea Route, icebreakers will be sent to free it, Rosatom continues. The Russian nuclear agency has finally posted on its Twitter account an animated image from the series “Austin Powers” where the main character is stuck in a small vehicle making a round trip in a narrow tunnel, the vehicle being covered with an image of Ever Given using Photoshop.

Thread: reasons to consider Northern Sea Route as a viable alternative to the Suez Canal Route

Clearing the container ship could take “days, even weeks”

Clear the giant container ship blocking navigation on the Suez Canal could take “days, even weeks”, according to a Dutch rescue company whose experts were to be on site Thursday.

Global warming, from which Russia is suffering the full effects according to a report published on Thursday, has indeed positive on the northern sea route where the melting ice allows greater practicability, opening up new trade prospects in the Far North. .

A dozen girls parade naked to invoke the rain, an open investigation