Is the UK undergoing a third wave? 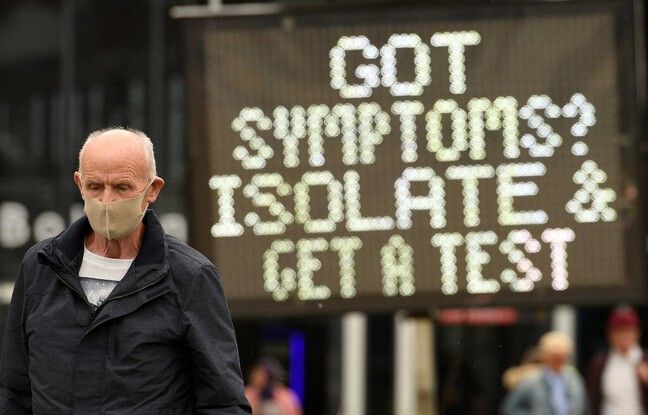 This Monday, May 31, the United Kingdom had more 3,383 new cases of coronavirus in 24 hours. A daily assessment above 3,000 cases for the sixth day in a row, while this symbolic bar had not been exceeded for two months across the Channel. Something to give suspicion of a third wave, as the country has seen the Indian variant become the majority and the final stage of deconfinement, scheduled for June 21, is approaching.

The R (number of people that a sick person will on average infect) is 1.14, well above 1 (the value from which the epidemic increases). In France, the R is estimated at 0.85. “This is a very high R in the United Kingdom, far too high,” depicts epidemiologist Antoine Flahault, who predicts more than 4,000 cases per day in a week.

The deconfinement of all dangers

A figure that may still seem very low, but when it comes to waves, it is the rate of increase that must be closely scrutinized, and not the absolute value. The researcher in epidemiology Michaël Rochoy explains: “It is not because a wave starts from very low that it will not be very quickly dangerous. We must not wait for great values ​​in order to be alarmed. It is the dynamics that must be monitored. “And concretely, the number of British cases is doubling every two weeks.

How to explain such a situation? Two theories are being studied, without necessarily canceling each other out. First, the Indian variant, which now accounts for 75% of contaminations in the British Isles. This variant is strongly suspected of being even more contagious than the English variant, already more contagious than the original strain. Second, the British deconfinement, which naturally explains an increase in cases with a general relaxation and the opening of indoor places without masks, such as restaurants or pubs, since May 17. “With such places and such openings, the epidemic is more likely to resume than before,” notes Antoine Flahault.

What about vaccination? The British are known to be the European country with the most vaccines, with 72% of the adult population having been vaccinated for the first time, but “only” 43% of Britons received both doses, with the nation favoring a larger one. number of first doses even if it means spacing out the second doses. However, immunity is not acquired until two weeks after the two doses, and the first dose has little efficacy, even less against the Indian variant. According to some studies, while a person vaccinated first had 50% less risk of catching the coronavirus, it would rather be 30% compared to the Indian variant.

“It is possible that the British pay for their choice of massively first-vaccinated rather than ensuring a larger part of the population totally immune”, analyzes Antoine Flahault. For Michaël Rochoy, we should not judge the United Kingdom too harshly either: with 43% of its population having had two doses, the nation has a percentage twice that of France. Still, hospitalizations are up 20% compared to last week, and deaths by 42%. Extremely low figures (60 deaths from the coronavirus in seven days), which can distort the calculations, but with sufficient momentum to be worrying.

Does this quivering wave necessitate worry for the British? Not so sure. First, because as incomplete as the vaccination is, it is still well advanced, especially in the most fragile people. “Unlike the other waves, it is possible that this one will result in fewer hospitalizations, resuscitations and deaths, thanks to the vaccination. There could be a large number of cases without having a real impact on the saturation of hospitals, ”hopes Michaël Rochoy. For the first time since July 2020, the United Kingdom did not deplore any death from Covid-19 in 24 hours on Tuesday.

Second source of hope, the British reaction. The country’s Scientific Council is already alerting to this third wave, while the government is increasingly questioning its deconfinement, and in particular the stage of June 21, which should see the reopening of nightclubs and the lifting of the last strong measures of restriction. Antoine Flahault: “Unlike the other waves, the government seems ready to act very early in order not to be overwhelmed as in December-January. Stop the wave before it breaks.