Israel comes out of its third lockdown from this Sunday 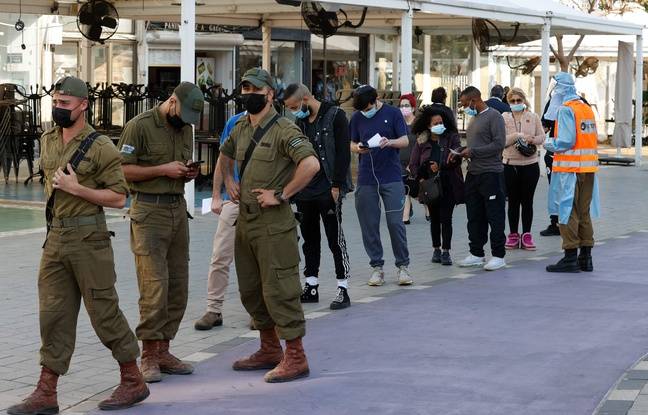 Hairdressing salons reopened, customers returning to some shops and trips that can stretch for more than a kilometer: Israel begins Sunday to emerge from its third lockdown since the start of the Covid-19 pandemic against the backdrop of intense campaign vaccination.

On the night of Thursday to Friday, the government announced relief from Sunday of the containment in place since the end of December in the wake of a new wave of contamination.

Sunday morning, non-essential businesses were able to reopen in Jerusalem, for example, such as Eli Aroas’ barber shop. “I informed my clients that we are going back to work (…) The clients will arrive soon and we hope that this is the end of this saga”, rejoiced Mr. Aroas, 58, while waiting to be able to come out again. his scissors and beard trimmers.

Sarit Reouven, 49, came to central Jerusalem to buy shoes just in time for her son’s wedding on Monday. “This reopening is really a good thing. There is a wind of optimism in the air (…) I think we can already foresee the end of the crisis, ”she said, hoping to get out of her“ last confinement ”.

Since mid-December, and thanks to an agreement with the giant Pfizer on the sharing of its medical data, Israel has vaccinated more than 3.4 million people (nearly 40% of its population), including more than two million received a second dose.

Despite the containment measures, and the vaccination campaign, January was the deadliest month since the start of the pandemic in Israel, with more than 1,000 deaths from the virus. According to the latest report from the Ministry of Health, the country of nine million inhabitants has officially recorded more than 686,000 cases including 5,074 deaths since the start of the pandemic.

The Hebrew state is currently recording an average of around 6,500 new cases per day compared to around 8,000 in mid-January, according to official figures. And since the vaccine takes some time to be effective, the authorities expect the number of cases, and especially hospitalizations, to decline in the coming weeks.

Since Sunday, Israelis can move beyond one kilometer from their homes. Nature reserves and national parks have also announced the reopening of their doors, as have guest houses, but only to nuclear families. As for the hotels, they remain closed and restaurants are once again allowed to sell to take away but not to serve their customers on site.

International flights, almost all suspended since January 24, will not resume until February 20, the government announced Friday, which is also maintaining the closure of land borders.

Transport Minister Miri Regev, however, told Military Radio on Sunday that the government would allow Israelis stranded outside the country to return with special planes before February 20.

The cabinet must finally meet again on Sunday to decide on the continuation of the deconfinement measures, in particular with regard to the school system, completely closed for more than a month.