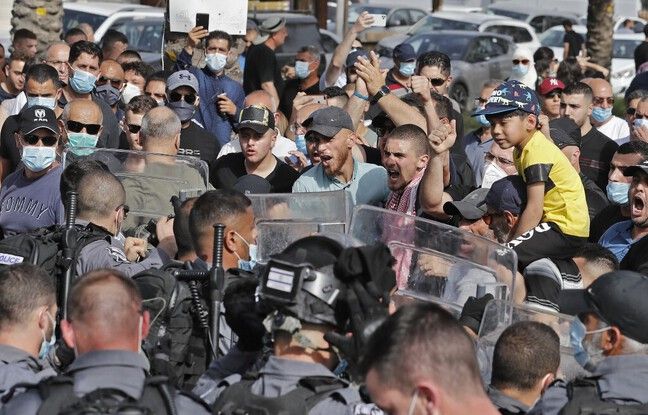 The new outbreak of violence between the IDF and Hamas this week has been accompanied by more unprecedented events: riots, violent and sometimes deadly, in mixed Israeli towns, with Israeli Arabs. Around 20% of the population of the Hebrew state is Arab: a few are Christians but almost all are Muslims. To understand who these longtime Israeli nationals are than many Jewish immigrants, 20 Minutes interviewed the lecturer at Science Po Paris Frédéric Encel, author of Israel’s Geopolitical Atlas (Other).

Who are the Israeli Arabs, what historically separates them from the Palestinian Arabs?

First we should call them Arabic speakers. Because there are four different groups that do not have the same goals and do not have the same sense of belonging. Apart from the language, what they have in common is that it is the Palestinians who remained in the State of Israel after the end of the 1948-1949 war. In January 1949, 156,000 Arabs remained in Israel, or about 15% of the population at the time. This is the minority who have not fled the war or been expelled. These will become full Israeli citizens.

What are these four groups you are talking about?

The first and most important (at least 80% of the total) are the Muslim Arabs. They represent themselves as Palestinians even though they have an Israeli identity card. But they have been very loyal since 1948 to the State of Israel. The other three collectives each represent only 5 or 6% each. First there are the Bedouins, who are certainly Arabs and Muslims but whose allegiance goes first and foremost to their tribe. Then there are the Christian Arabs who can also define themselves as Palestinians, but who, faced with the rise of Islamism, act above all as Christians. Finally, there are the Druze. They are absolutely loyal to the State of Israel: as early as 1949 they demanded not to be seen as Arabs like the others and asked and obtained to be subjected to conscription. Today they are the backbone of the Israeli army. We are beyond loyalty.

So let’s talk about these Muslim Arabs: what are their relations with the Palestinians in the territories?

There is a great deal of ambivalence in sentiment towards Palestinians in the West Bank and Gaza. First of all because on the social, legal, economic, civic level … These Israeli Arabs know perfectly well that they are treated much better in Israel than they would be everywhere else in the Middle East: it remains a democracy. And Israeli Arabs have never risked this privileged status, in the Middle Eastern sense of the term. Despite everything, there is a Palestinian national sentiment, which has grown more and more over the past decades. But in an increasingly conservative or even Islamist fashion: the Palestinian Authority cannot really count on this “internal lobby” in Israel because it is more of a reinforcement for Hamas.

Are they loyal to Israel but at the same time behind Hamas?

For those who have a growing Palestinian national sentiment, the expression of this rising sentiment is a conservative or even Islamist expression. Three of the four Israeli Arab parties are conservative or Islamist, whereas until the 1980s they were rather communists, trade unionists, close to leftist Palestinian movements. Many Palestinian groups, which were close to the Communists, switched to the Islamist side in the years 1990-2000. But it follows the general trend in the Arab world during the period.

Before this week, has it never created tensions in Israel?

Except in October 2000 for three days at the start of the second intifada, when we witnessed riots comparable to what we saw this week, there never were. In a country that has been at war of very high intensity several times, there has never been an uprising, which would have opened a new front. There was not a stone throw during the four Arab-Israeli wars. If it is not loyalty… Yes what happened this week is very serious, there were deaths, but let us always come back to long time: from 1948 to 2021 there were twice three days of death. ‘clashes.

It is said a lot that the links between Arabs and Israeli Jews have strengthened lately, how to explain the events of this week?

It is true that there has been a wave of optimism in recent years. Thanks to diplomatic rapprochement with several Arab states. Secondly, because there was an economic boom in Israel. This does not mean that everyone benefits in the same way, but almost everyone benefits: Israeli Arabs today have a higher standard of living than that of their parents or grandparents or than in the countries Arab neighbors. Of course, the rate of enrichment is not that of the Jews of Tel Aviv who work in tech, but it is like that all over the world. And the health crisis caused a rapprochement: it showed many Jews who had never met an Arab in their life that nurses are 30% Arab and that doctors and sometimes surgeons are Arabs. On the other hand, the Israeli Arabs were also able to count on the vaccination campaign.

The events of this week, for me, are provoked, in a conjunctural way by the instrumentalization of the symbolic load of several weeks of clashes in Jerusalem, combined with Ramadan. And then over a longer period of time, despite what we said earlier, there are no prospects, neither global diplomacy nor internal politics in the Palestinian Authority, after the cancellation of the first elections in fifteen. years: of course, Israeli Arabs do not vote there, but their families, a few kilometers or tens of kilometers away, yes, and they also feel represented by them.