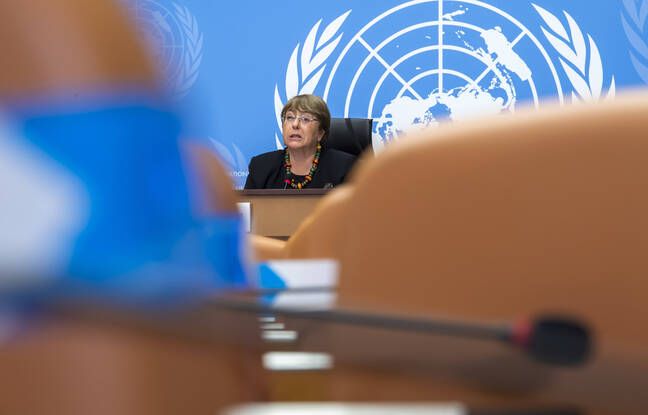 The UN warned Israel on Thursday following its recent strikes on the Gaza Strip. “If it turns out that the impact on civilians and civilian objects is indiscriminate and disproportionate, this attack may constitute a war crime,” said the UN High Commissioner for Human Rights, Michelle Bachelet at the opening of a special meeting of the UN Human Rights Council.

While the Human Rights Council examines the request for an investigation. In particular, the United Nations said it had seen no evidence of the presence of armed groups or military action in the buildings targeted by Israel in Gaza. Michelle Bachelet underlines in fact that the rocket fire launched by the Palestinian Islamist movement Hamas “does not distinguish between military and civilian objects, and their use therefore constitutes a clear violation of international humanitarian law”.

The meeting, which focuses on human rights abuses in the occupied Palestinian territories, including East Jerusalem, and Israel, is being held at the request of Pakistan, as coordinator of the Organization of Islamic Cooperation, and Palestinian authorities. A draft resolution calls for the committee to examine “all alleged violations of international humanitarian law and all alleged violations and abuses of international human rights law” that have resulted in recent Israeli-Palestinian tensions.

From May 10 to 21, 254 Palestinians were killed by Israeli strikes in the Gaza Strip, including 66 children and fighters, according to local authorities. In Israel, rocket fire from Gaza killed 12 people, including a child, a teenage girl and a soldier, according to police.

The root causes of the tensions under study

The scope of the resolution goes far beyond the most recent conflict. The text asks the commission to study “all the root causes of recurrent tensions (…), including systematic discrimination and repression based on national, ethnic, racial or religious identity”. The investigation should focus on establishing the facts and collecting evidence and material that could be used in legal proceedings and as far as possible identifying the culprits so that they can be tried.

Palestinian Foreign Minister Riyad al-Maliki, who addressed the assembly online, accused Israel of establishing “an apartheid regime which is based on the oppression of the Palestinian people” and its ” forced displacement ”. He also claimed “the right (of Palestinians editor’s note) to resist the occupation”, and asserted that “the settlers must be put on the terrorist list”.

Israel’s Ambassador to the UN in Geneva Meirav Eilon Shahar for her part accused Hamas of having “initiated this conflict” and assured that her country “has done everything to defuse tensions”. “You can’t be pro-Palestinian if you don’t condemn Hamas,” she said.

Council accused of being anti-Israel

If the resolution were to pass, it would be the first time that the Council had set up a commission of inquiry with an indefinite mandate. The mandate of other commissions of inquiry, such as the one on Syria, must be renewed every year. Pakistani Ambassador to the UN in Geneva Khalil Hashmi told reporters on Wednesday that the most recent conflict was only the latest in a long cycle.

Twenty of the 47 Council members were among the 66 countries that supported the request for a special session. When announcing the meeting, the Israeli ambassador denounced a summons which “proves that this body has an anti-Israel program”. Israel is indeed the only country to have a fixed item on the agenda of each Council session, dedicated to the treatment of the Palestinians by Israel (item 7), one of the reasons why the United States, under the presidency of Donald Trump, had left the organization. New President Joe Biden has brought the United States back as an observer country.

Share
Facebook
Twitter
Pinterest
WhatsApp
Previous articleThe coronavirus will cost Social Security at least 5 billion more than expected in 2021
Next articleResidents of Goma evacuate in disaster, facing the risk of eruption of the Nyiragongo volcano