Japan observes minute of silence in tribute to victims of March 11, 2011 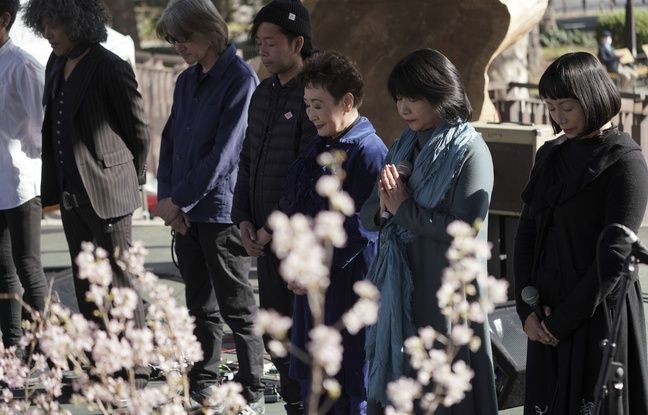 On March 11, 2011, a powerful 9.0 magnitude earthquake in the northeast of the country triggered a deadly tsunami and the Fukushima nuclear accident. The Japanese observed a minute of silence this Thursday at 2:46 p.m. (5:46 a.m. GMT), when the first tremors came 10 years ago.

The triple disaster left nearly 18,500 dead or missing, mainly due to the tsunami. The ensuing nuclear accident at the Fukushima Daiichi power plant left entire cities uninhabitable for years and displaced tens of thousands of people. It was the worst nuclear accident since that of Chernobyl (Ukraine) in 1986.

“Our predecessors overcame every crisis with courage and hope”

“The magnitude of the damage caused by the disaster runs so deep that the unforgettable memory of the tragedy lingers in my mind,” the Emperor said. “Our nation has lived through several disasters that can be considered as national crises” but “our predecessors have overcome each crisis with courage and hope”, recalled for his part Mr. Suga, assuring that Japan would look “always towards the before ”.

Public and private tributes were held throughout the day in northeastern Japan, such as in Hisanohama, in the coastal town of Iwaki (Fukushima county), where 78-year-old Toshio Kumaki prayed at sunrise. day on the concrete tsunami wall built after 2011. “I come for a walk here every morning, but today is a special day,” he said, praying towards the rising sun.

In Miyagi, one of the three most damaged departments in the northeast, search operations have been organized by residents who still hope to find a loved one. The remains of a woman swept away by the tsunami of ten years ago were identified last week, freeing her son from excruciating uncertainty and allowing him, at last, to mourn.

On February 13, a 7.3 magnitude earthquake reminded us of the permanent seismic risks off the coast of Japan. More than a hundred people were injured in this earthquake, considered a distant replica of that of 2011.

“This is the day I lost my classmates”

These commemorations took place just two weeks before the scheduled departure, in Fukushima, of the Olympic torch relay for the Tokyo 2020 Olympics, known as the “Reconstruction Games”. The shadow of the pandemic hangs over the event, postponed to this year, but the Japanese government and organizers hope that the relay will refocus attention on this bruised region.

Nayuta Ganbe, a student from Sendai, capital of Miyagi County, speaks regularly at disaster prevention-themed events, drawing on her personal experience of the tsunami. But he usually prefers to pray in private on March 11. “It was the day I lost my classmates. People died in front of my eyes. It’s a day that I hope I never have to relive, ”says the young man, now 21 years old. This year, however, he wanted to participate in a ceremony: “Exactly 10 years later, I hope to face the disaster from a new perspective,” he explained.

For many, this anniversary is the occasion of a moment of personal reflection on a national drama still painfully present with tens of thousands of displaced people and 2% of the area of ​​Fukushima in the forbidden zone.

Pastor Akira Sato, who preached in several Baptist churches and chapels still in the forbidden zone today, had to go to one of these abandoned places to meditate. “My wife and I will silently reflect on the days of the disaster and offer a prayer,” he said earlier this month.