Japan to dump Fukushima water into sea after treatment 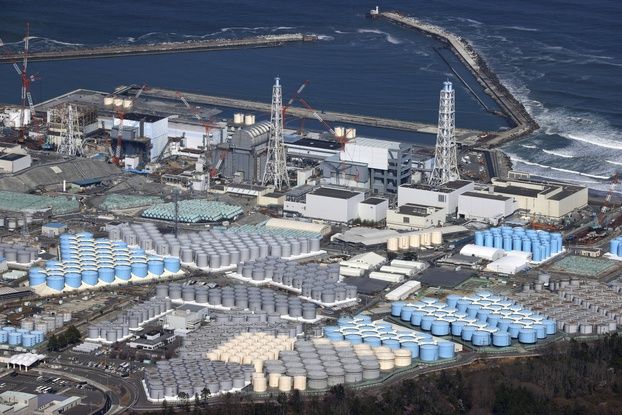 This is the equivalent of more than 400 Olympic swimming pools. Japan will discharge into the sea, after treatment, water from the damaged Fukushima nuclear power plant, Prime Minister Yoshihide Suga announced Tuesday, despite opposition to the project. This decision puts an end to seven years of debates on how to get rid of water from rain, groundwater or injections needed to cool the cores of nuclear reactors that melted after the gigantic tsunami of March 11, 2011. .

The water will be released “after making sure that it is at a level (of radioactive substances,) well below safety standards,” Yoshihide Suga said, adding that the Japanese government would take “measures” to prevent this from damaging the reputation of the region.

About 1.25 million tonnes of contaminated water are currently stored in more than a thousand cisterns near the nuclear power plant that crashed ten years ago in northeastern Japan.

A decision was all the more urgent as the limits of on-site water storage capacity could be reached as early as autumn 2022.

The water intended to be released in this operation, which should take several years, has been filtered several times to be free of most of its radioactive substances (radionuclides), but not of the tritium, which cannot be eliminated with the current techniques.

This option, favored to the detriment of other scenarios, such as evaporation in the air or sustainable storage, is particularly strongly contested by the fishermen and farmers of Fukushima who fear that this will further degrade the image of their products among consumers. consumers.

“We are taking this decision seriously,” said Tomoaki Kobayakawa, the boss of Tepco, the operator of the damaged nuclear power plant, on Tuesday. “We will take measures to prevent harmful rumors from circulating” against local agriculture, forestry, fishing and tourism, he added.

“The management of contaminated water is an issue that cannot be avoided” as part of the reconstruction in Fukushima, Suga told reporters last Wednesday after his meeting with the leader of the federation of fishing cooperatives. from Japan, strongly opposed to the project.

The government “told us that it would not throw the water away without the support of the fishermen,” NHK Kanji Tachiya, head of a local fishing cooperative in Fukushima, told public broadcaster NHK Kanji Tachiya on Tuesday morning before the start. announcement of the decision. “Now they are coming back to it and telling us that they are going to reject the water, it is incomprehensible”, he added.

Neighbors of Japan, with whom Tokyo maintains stormy relations amid historical disputes, also expressed their dissatisfaction, China having communicated on Monday its “serious concerns” and called on Japan to be “cautious” in the elimination of the contaminated water.

South Korea has expressed its “deep concern” over the Japanese decision to dump the contaminated water.

In early 2020, experts commissioned by the government recommended dumping at sea, a practice that already exists in Japan and abroad on active nuclear installations.

Tritium is only dangerous to human health in very high doses, according to experts. The International Atomic Energy Agency (IAEA) also advocates the option of dilution at sea.

The environmental organization Greenpeace, however, has called for continuing to store the water until the technology allows it to be completely decontaminated. “The decision to dump contaminated water into the ocean is going to leave huge problems for the future,” he said. declared Greenpeace Monday in a statement.