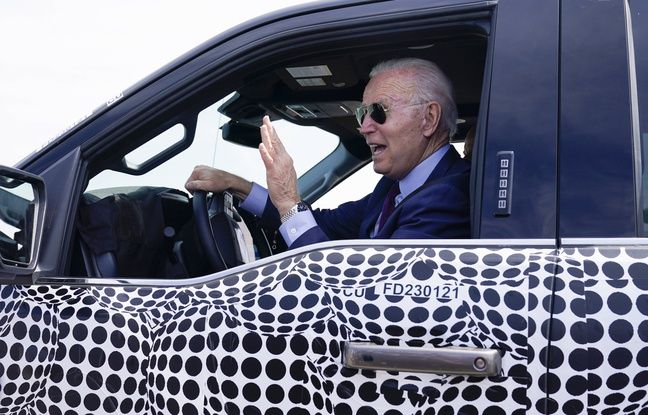 George W. Bush missed driving so much that he took advantage of it on his ranch as soon as he returned to Texas. This is because the Secret Service forbids American presidents – even after the end of their mandate – from driving on public roads, a rule imposed after the assassination of JFK in 1963. It is therefore a smiling Joe Biden who got behind the wheel of Ford’s new electric pickup, the F-150 Lightning, on Tuesday during a visit to the Ford Rouge Electric Vehicle Center in Dearborn, Mich.

The American president not having the right to drive on public roads, Joe Biden had fun driving Ford’s electric truck (F-150 Lightning) which made 0-100 in 4.4 seconds (there was a bodyguard next door)pic.twitter.com/sIV9toooPM

“This car goes fast,” said Biden, before accelerating foot to the floor on the test circuit. The truck, which is officially to be unveiled on Wednesday, was still covered. According to the American president, it accelerates from 0 to 100 km / h in about 4.4 seconds. It’s equivalent to the mid-size model of Tesla’s Cybertruck, but 50% slower than its three-engine version.

Biden campaigning for his infrastructure plan

“The future of the auto industry is electric,” Biden then hammered. “The only question is whether we build these vehicles and the batteries that go with them here in the United States or whether we will depend on other countries. “To date, China is in the lead,” he said, highlighting in particular the advance of the world’s second largest economy in the batteries. “They think they will win, my friends, I have a message for them: they will not win,” he added.

As he has been doing for several days, the American president has come to promote his plan for massive investments in infrastructure. This “American Jobs Plan” of some 2,000 billion dollars is at this stage only a proposal that will have to be voted – as it is or significantly modified – by Congress, where the Democrats have only a narrow majority. .

The text provides for multiple incentives to support the electric vehicle market, with the construction of a national network of 500,000 charging stations by 2030, and the switch to electricity for 20% of the famous yellow school bus buses.