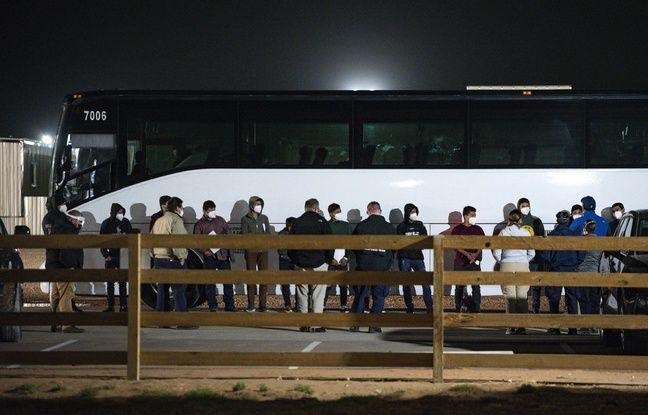 Even though the White House refuses to use the term, this is the Biden administration’s first crisis. The United States is awaiting a historic flow of migrants at its border with Mexico and is struggling to welcome unaccompanied minors, admitted Tuesday the American Minister for Homeland Security, Alejandro Mayorkas.

More than 100,000 irregular migrants were arrested at the border in February, and, although seasonal flows partly explain the increase, Republicans accuse the Democratic president of creating a “call for air” by ending the Donald Trump’s migration policy.

Towards record figures in more than 20 years

“We are on track to have more people on the southwest border than we have had in the past 20 years,” Mayorkas said in a statement. The situation “is difficult. We are working around the clock to manage it. “

In February, more than 100,000 irregular migrants were arrested at the border, including more than 70,000 single adults, nearly 20,000 family members and 9,457 unaccompanied minors. That’s a 30% increase from February 2019, the highest year under the Trump administration.

A center for minors with 729% capacity

The growing arrival of unaccompanied minors, “some of whom are only six or seven”, poses the most difficult problem because, unlike adults, they are not returned to Mexico or their country of origin, stressed The Minister. The reception structures of border guards dedicated to those under 18 “are overcrowded” and the Ministry of Health “is not able to accommodate the flows of single children that we know”, admitted Mayorkas. .

According to an internal report obtained by CBS, the center in Donna, Texas, was notably at a capacity of 729%, with 1,800 people instead of a maximum set at 250 with the Covid-19 pandemic. “The children take turns sleeping on the floor,” said a lawyer from the National Center for Youth Law on the American network.

All US administrations are experiencing peaks, often seasonal, in migrant arrivals. Under Donald Trump, the May 2019 record (133,000 arrests) was notably seven times higher than the May 2017 low (19,000). According to a study by the Pew research center, the current rise is fueled in particular by “climate migrants” fleeing Honduras, Guatemala and Nicaragua, while the region was hit by two hurricanes at the end of 2020 which caused serious flooding.

But for the leader of the Republican minority in the House of Representatives, Kevin McCarthy, “this crisis was created by the presidential policies of the new administration”. “It can have no other name than the Biden border crisis,” he said during a visit to Texas, on the border with Mexico, in the company of a dozen other elected Republicans from bedroom.

From his first day at the White House on January 20, Joe Biden signed a moratorium on the deportation of undocumented migrants who arrived in the United States before November 2020 and ended the policy of family separation. He promised a broad migration reform, which would pave the way for naturalization for some 11 million illegal immigrants. Even as deportations of newcomers continue, all of this has encouraged migrants to take their chances, Republicans say.