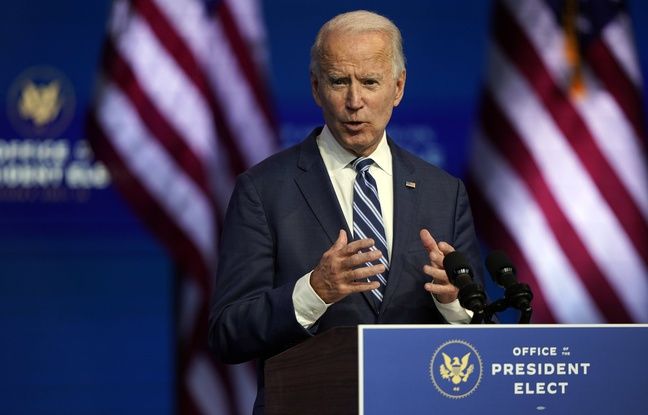 He met with several international leaders, including Emmanuel Macron, on Tuesday. Now, US President-elect Joe Biden is “eager” to speak to Donald Trump, who has still not acknowledged the Democrat’s victory.

To a reporter who asked him what he would say to Donald Trump if the latter was watching his press conference, held on Tuesday in his home town of Wilmington, Joe Biden replied, staring at the camera and with a smile: ” Mr. Chairman, I look forward to talking to you ”.

“Embarrassment” but “not much impact”

Donald Trump’s refusal to concede defeat in the presidential election is “a source of embarrassment”, but will “not have much of an impact” on the transition of power, the president-elect also said. “I think it’s an embarrassment, honestly,” the Democrat replied to a reporter who asked him about the attitude of the Republican billionaire. “I believe it will not serve the president’s legacy,” he added.

But “the fact that they (the Republicans) do not want to recognize at this stage that we have won does not have much impact on our transition program”, he said.

“We are already starting the transition, it is already well underway,” he added, explaining in particular working on the composition of his future government.

Biden announces the return of America

While waiting to unveil his team, President-elect Joe Biden said America was “back” on the world stage and said he was “confident” in its ability to restore international “respect” to his country.

The Democrat stressed during this press briefing that he had spoken with six world leaders. “I told them America is back”, “it’s not America alone anymore”.

Their response was very “enthusiastic (…) so I have confidence, we will succeed in restoring the respect that America enjoyed before”, he added.