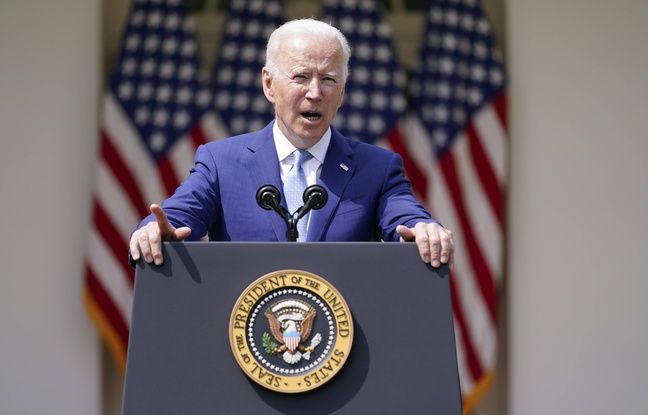 For Joe Biden, it is an “international disgrace”. The US president on Thursday unveiled targeted measures to limit the proliferation of firearms in the United States, where shootings are a recurring scourge that successive governments have so far been powerless to stem. In one month, the United States was hit by three major shootings in Georgia, Colorado and California.

“Gun violence in this country is an epidemic,” blasted the Democrat, announcing six decrees from the White House, which remain limited in scope. One of these measures aims to combat “ghost weapons”, which are handcrafted, sometimes with a 3D printer, and do not have a serial number.

The rules for certain handguns equipped with a stabilizer attachment attached to the shooter’s arm, a device used in a recent massacre in Colorado, will also be tightened.

The president also ordered a first general report on the trafficking of firearms in the United States since 2000. “These measures will save lives,” said Democratic Speaker of the House of Representatives Nancy Pelosi in a statement.

But knowing full well that he is currently not in a position to force more daring action in Congress on this ultra-sensitive subject, due to the very narrow Democratic parliamentary majority, Biden has contented himself with micro-measures. Consequently, no major progress has been announced, for example, on the subject of checking the criminal or psychological background of buyers of small arms.

The president also announced the appointment of David Chipman, a proponent of tougher small arms laws, to head the ATF, the federal agency that regulates firearms. A sign of the lack of political unity on this delicate subject, the ATF has not had a director confirmed by the Senate since 2015.

“We must also ban assault rifles and high capacity magazines”, often used in killings, also launched Thursday Mr. Biden, repeating a wishful thinking many times expressed in his time by Barack Obama. Joe Biden, a longtime advocate for better gun regulation, pledged during his campaign to act on this front. A spate of shootings in recent weeks, including killings in Georgia and later in Colorado, has increased pressure for him to take action.

In 1994, then senator, Joe Biden had participated in the passage of a law banning assault rifles. But the measure was only valid for ten years and could never be renewed after 2004 given the opposition of elected Republican officials to what they perceive as a violation of a constitutional right.

Former President Donald Trump, who received tens of millions of dollars from the NRA, the powerful gun lobby, for his two presidential campaigns, has on the contrary in the past claimed to be the most fervent defender of American rights. to hold a weapon.

Firearms killed more than 43,000 people, two-thirds of whom were suicides, in the United States in 2020, according to the Gun Violence Archive website. The organization counted 611 “mass shootings” – which count at least four victims – in 2020, against 417 the previous year.

But many Americans remain very attached to their guns and have even rushed to buy more since the start of the pandemic, and even more during the major anti-racist protests of spring 2020 and the electoral tensions of the fall. “They want to confiscate your weapons,” said Republican elected official Jim Jordan. Joe Biden assured that none of these measures “infringed” on the Second Amendment of the Constitution, brandished by defenders of firearms as the guarantee of their right to carry a weapon.