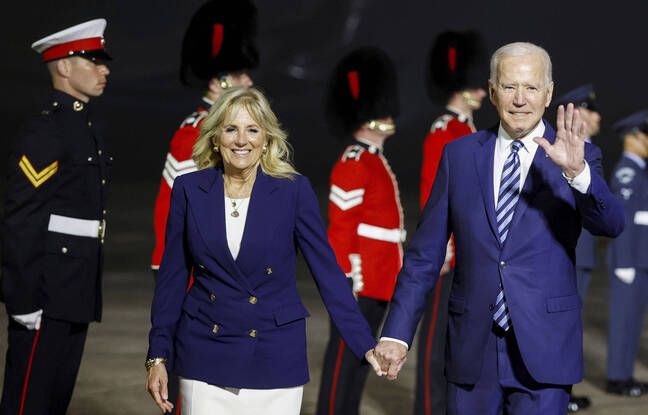 “The United States is back! “. Joe Biden’s words shortly after arriving in the UK on Wednesday evening are clear: his country is once again planning to weigh heavily on the world stage. The American president is therefore starting a tour in Europe where he must meet Vladimir Putin and announce, in a strong gesture at the G7 summit, the purchase of half a billion doses of Pfizer / BioNTech vaccine against the coronavirus for the countries poor.

Joe Biden, accompanied by First Lady Jill Biden, landed in England aboard Air Force One for his first overseas trip as president. This Thursday, the tenant of the White House is to meet face-to-face with British Prime Minister Boris Johnson. The two leaders intend to agree at their first meeting on a new “Atlantic Charter”, on the model of that signed by their predecessors Roosevelt and Churchill, taking into account the threat of cyber attacks and global warming, said Downing Street. Sunday, Joe Biden will visit, at Windsor Castle, Queen Elisabeth II, who has reigned for 69 years, then participate in the NATO summit before another summit with the European Union.

Biden wants to be firm with Putin

But the meeting with Vladimir Putin, scheduled for June 16 in Geneva, appears to be the culmination of this first trip, which comes at a time when Joe Biden is in difficulty in his country, against a backdrop of tensions within his own camp. On Wednesday evening, the American president indicated his intention to tell his Russian counterpart “what I want him to know”. And repeated his warning that the United States “will respond strongly and meaningfully” if Moscow engages in “harmful” activities. He does not seek “the conflict with Russia”, but “a stable and predictable relationship”, he continued.

Ukraine, Belarus, fate of the imprisoned Russian opponent Alexeï Navalny, cyberattacks: the discussions promise to be bitter and difficult, especially on this last point. The American presidency has given few details on the conduct of this tête-à-tête. She only hinted that, unlike what happened with Donald Trump in Helsinki in 2018, a joint press conference between the two men was not on the agenda.