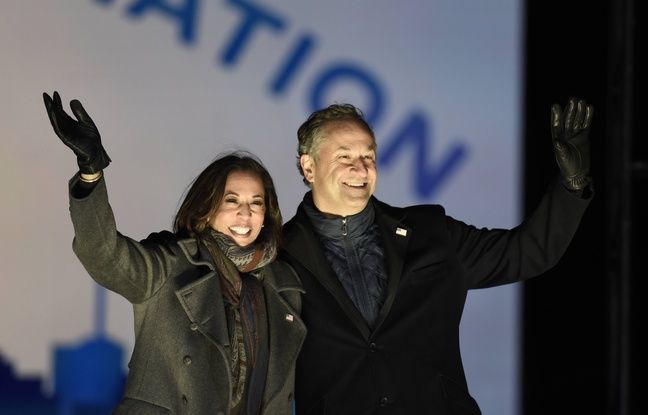 A “modern family” to support Vice President Kamala Harras. Her husband, Doug Emhoff, tweeted his pride after his wife won alongside Joe Biden. Moreover on the social network, the first “Second Gentleman” presents himself as, “dad, husband of Kamala Harris, lawyer, aspiring golfer, defender of justice and equality”.

At 56, like his wife, Doug Emhoff has crisscrossed the country and actively participated – on Zoom or in person – in the Democratic campaign, increasing trips when Joe Biden was confined to his home, in Wilmington, due to the coronavirus pandemic . He spent the evening before the election in Philadelphia, in the key state of Pennsylvania, with singer John Legend. During the campaign, he assured that he would work in the White House on issues of access to justice for the most disadvantaged.

Born October 13, 1964 in the Brooklyn neighborhood to a Jewish family in New York City before moving to California, Douglas Emhoff studied law at California State University. The entertainment lawyer went on unpaid leave at the end of August, when Joe Biden appointed Kamala Harris as his running mate. He had previously worked for the Los Angeles-based firm DLA Piper.

They meet during a “blind date”

He has two children from a first marriage, Cole (26) and Ella (21). He divorced in 2008 from his first wife with whom he remained on very good terms. In 2013, he met Kamala Harris, then attorney general of California, during a “blind date” organized by a friend of her. They get married the following year.

The couple and their two children are a “modern family,” said Kamala Harris, recounting that her stepchildren Cole and Ella called her “Momala.” The couple is very united and Doug Emhoff gives the image of a husband entirely devoted to his wife. In June 2019, at the California Democrats’ convention, he did not hesitate to jump on the stage to protect Kamala Harris from an activist who had taken the microphone from him.

The accomplished athlete – tennis, baseball – recently said his wife had urged him to make a habit of playing sports every day. “Kamala and I like to walk talking, ten kilometers, and when we see stairs, we run up them,” he told Men’s Health magazine.