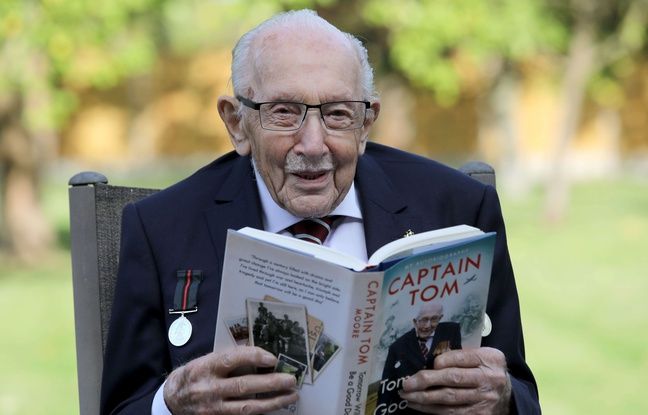 The United Kingdom paid a final tribute on Saturday to its hero Captain Tom, a veteran who died at the age of 100 in early February. He was adored for having raised a record sum for caregivers during the first confinement, during a televised funeral marked by military honors.

The coffin of Tom Moore, wrapped in the British flag, on which rested his medals, was carried to the crematorium of Bedford (central England) by six soldiers of the Yorkshire Regiment, an infantry regiment which succeeded the one in which he had served during World War II.

In a moving ceremony with military honours, the last post was played to honour this truly inspirational hero.#FarewellCaptTom #WeSaluteYou

Before the start of the ceremony, broadcast live on television, a plane involved in the conflict flew over the scene under a spring sun, while three salutes of honor were fired. But due to the confinement in force since early January in the United Kingdom to fight against the coronavirus, only eight relatives attended the ceremony, private: his two daughters, his four grandchildren and his two step-sons.

“Dad, I am so proud of you, of what you have accomplished throughout your life and especially the past year,” said his daughter, Lucy Teixeira. “You may be gone, but your message and your spirit endure,” she added at the funeral service which opened with a song recorded by Captain Tom with star Michael Ball, the Liverpool anthem FC You’ll Never Walk Alone, which became a symbol of mutual aid during the pandemic.

Her other daughter, Hannah Ingram-Moore, pointed out that her father had succeeded in “captivating” the world with “his sense of hope, his positivity and his tenacity.” Aged 99 during the first confinement in spring 2020, Tom Moore had initially set a modest goal of raising 1,000 pounds (1,153 euros) to help the national health service, overwhelmed by patients with the virus. To do this, he had made a commitment to walk 100 lengths of his garden before his hundredth birthday.

The image of the veteran hunched over his walker and moving forward at all costs had galvanized the British and their sense of gratitude towards caregivers. Donations had then poured in and the veteran had finally raised nearly 33 million pounds (38 million euros), the largest amount ever raised by a single person during a charity walk. His prowess had raised him to the rank of celebrity. He had already received military honors for his 100th birthday, before being knighted by Queen Elisabeth II, released from her confinement for the occasion.

A book to come

The death of Captain Tom on February 2 in hospital, after contracting pneumonia and the coronavirus, had caused a shower of tributes, from the queen to the White House and the UN. “If there’s one lesson I’ve learned living with you for the past 13 years, it’s the power of positivity and kindness,” testified her grandson, Benjie. In accordance with Captain Tom’s wishes, the song My Way by Frank Sinatra closed the ceremony, before the bell rang for the dead in the army, The Last Post, followed by a minute of silence.

As an epitaph, the one who had made a career in construction chose “I told you I was old”, in reference to that of the British-Irish actor Spike Milligan, I told you I was sick. Messages of sympathy poured in by the thousands in an online condolence book, with the family calling on the public to stay at home, as per official guidelines.

In a book he wrote, the last chapter of which was unveiled by the family before its publication on April 2, Captain Tom said he was “curious and rather touching” that his death made people cry he didn’t know. “Before, my funeral would only have made a small line in the local newspaper.” When the relaxation of confinement allows, his ashes will be buried in Yorkshire (north), in the family vault alongside his parents and grandparents.