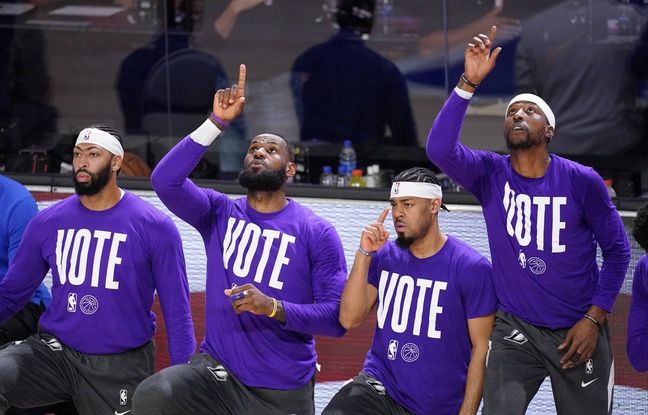 Unsurprisingly, LeBron James or Megan Rapinoe were delighted with the victory of Joe Biden against Donald Trump. These two stars of American sport have been campaigning for weeks in favor of the Democratic candidate. On Twitter, the four-time NBA champion basketball player posted a short video that shows him repeatedly smoking a cigar just after the Lakers’ coronation in early October with this caption: “More Than A Vote”. In short, another victory for the “King”, who had lobbied for the black vote to weigh in the US presidential election.

LBJ also posted a photo of famous action from the 2016 final they won with Cleveland against Golden State. A memorable cons he had inflicted on Andre Iguodala. His head and that of the former Warrior have been replaced by those of Biden and Trump. A paint that the editorial staff can only appreciate.

“Congratulations to President-elect Joe Biden and Vice-President-elect Kamala Harris! They campaigned fairly and honestly and I know they will run this country with equal respect. Joe Biden will heal and reunify this country. Like he said, there is neither blue nor red, but only Americans, ”tweeted Lakers legend Magic Johnson.

“America trusted the (voting) process and it paid off,” said Joel Embiid, star of the Philadelphia Sixers, the city where continued vote counting allowed Biden to overtake Trump in Pennsylvania. , A key state having finally confirmed its victory. “Your votes count !!! », Wrote Kyle Lowry, leader of the Raptors, recalling the crucial importance of the continuation of this process that Donald Trump wanted in vain to stop.

Rapinoe thanks the “black women”

Star of women’s football and world champion with the United States in 2019, Megan Rapinoe tweeted her “congratulations to President-elect Joe Biden and to Vice-President Kamala Harris”.

“I can’t underestimate how historic and amazing this is for Kamala Harris, for black and South Asian women, everywhere and for America. Never look back, never ”, also wrote the 34-year-old world champion, before, in a third message, to say“ thank you black women ”.