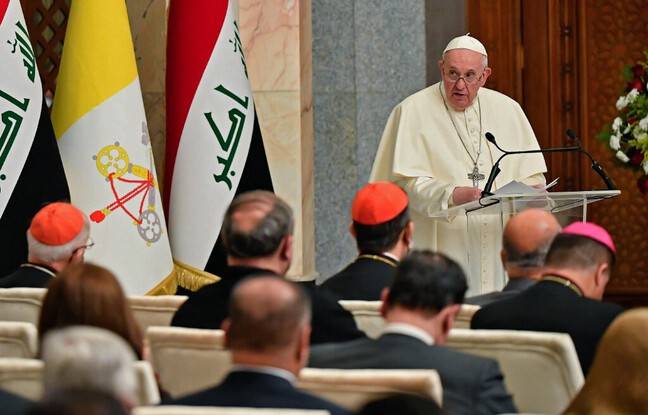 “Let the guns be silent! », Launched Pope Francis at the beginning of the first papal visit in the history of Iraq ravaged by wars and now confronted with the pandemic, greeting Christians« left »in spite of everything. Under high protection and circulating alone and masked under strict anti-Covid confinement, the 84-year-old pontiff thanked “bishops and priests, for having remained close” to a minority that has grown in twenty years to 1.5 million members to less than 400,000 depending on the violence and crises.

He began by recalling the ordeal of the Yazidis, a small esoteric community martyred by Daesh in 2014, before returning to one of the most painful episodes in the recent history of Christians in Iraq. In the Cathedral of Our Lady of Perpetual Help in Baghdad, targeted on the eve of All Saints’ Day 2010 by the bloodiest hostage-taking against Christians in Iraq (53 dead), he spoke of “our dead brothers and sisters ( …) Whose cause for beatification is in progress ”because they“ have paid the extreme price for their fidelity to the Lord and to his Church ”.

The leader of the world’s 1.3 billion Catholics raised all the hot topics in Iraq to his top officials, including President Barham Saleh, who sent the official invitation for this unprecedented visit and greeted “a guest appreciated ”by Iraqis. “You cannot imagine a Middle East without Christians,” argued Barham Saleh, himself a Muslim Kurd. “Enough violence, extremism, intolerance,” said the Pope. Enough also, of “corruption”, reason why hundreds of thousands of Iraqis demonstrated for months at the end of 2019. At the time already, the Pope had urged Iraq to stop repressing its young people in demand for justice .

We must “build justice”, he insisted again. And that “no one is considered a second-class citizen”, especially not Christians – 1% of the population in this Muslim country – nor the Yazidis, victims according to the Pope of “senseless and inhuman barbarities”. He also recalled “the very ancient presence of Christians on this land” where Abraham was born according to the tradition, pleading for “their participation in public life” as “citizens fully enjoying rights, freedom and responsibility”.

Regarding foreign interference, the Pope called on “the nations” not to “impose political or ideological interests” on Iraq. After this first speech to local dignitaries, another historic moment should take place on Saturday when the Pope will be received in the holy city of Najaf (south) by Grand Ayatollah Ali Sistani, 90 years old and never appeared in public. The Sovereign Pontiff will also participate in a prayer in Ur with Shiite, Sunni, Yazidi and Sabaean dignitaries.