“Let us work”, independent traders organize a funeral march to alert them to their situation 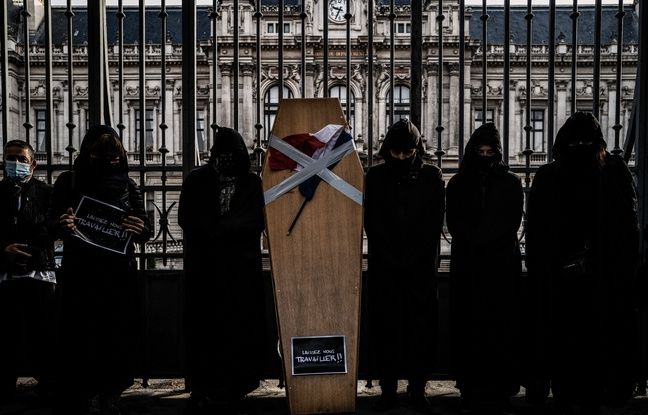 About two hundred traders and independents gathered Monday morning in front of the Rhône prefecture to alert on the situation of their establishments, closed since the second confinement. At the call of the Umih (Union of professions in the hotel industry), the FNH (national clothing federation) or even Toques blancs, an association of Lyon restaurateurs, the demonstrators were gathered around a common demand: “Let us work”.

Hairdressers, restaurateurs, gallery owners, hoteliers… At the sound of the funeral march, draped in black to the mask, various representatives of these non-essential professions affected by the closures linked to the new confinement stretched out on the ground to illustrate their agony. Then the procession set off for a U-turn of the building of the regional prefecture, with a coffin at its head, symbol of the death of their trades. Among the slogans, “everyone hates closures” or “we refuse to see a lifetime’s work destroyed.”

If Prime Minister Jean Castex hinted at a reopening in the event of an improvement in the health situation in the coming weeks, Fanny Hemmerlin, manager of a wooden toy store in Lyon, warns of “the urgency of saving Christmas”.

“Not everyone can be opened by” click & collect “, and even for those who do, it remains derisory compared to the turnover that we should normally do a few weeks before the holidays”, adds- she does. Séverine Laurier, owner of a Lyon ready-to-wear store, also laments: “My husband is a hairdresser, so he too has closed. We have five children and we risk ending up on the floor. The trader hopes that the insurers “will take their responsibilities”.

Christophe Marguin, president of Toques blancs lyonnaises, claims to be able to open restaurants “at least for lunch from Monday to Friday noon while the economy is running”. For Laurent Duc, president of Umih, it is already too late: “20% of hoteliers and 30 to 40% of restaurateurs and cafetiers will not recover or will change hands at the end of this year 2020” in France .