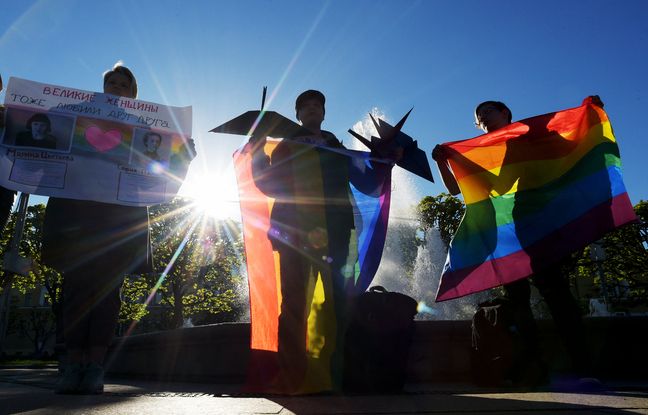 An abduction “. This is how a Russian association for the defense of LGBT rights has qualified the arrest of two Chechen men who were transferred in troubled conditions to Chechnya, known for its persecution of homosexuals. Salekh Magamadov and Ismail Issayev were apprehended by the security forces on Thursday in Nizhny Novgorod, in western Russia, and met on Saturday in a police station in the town of Goudermes, in Chechnya, 1,700 kilometers further north. South, according to the NGO “LGBT Set”.

They were held in a detention center in the Urus-Martan district of Chechnya, she said in a statement sent to AFP. The lawyer sent by the NGO on the spot, Mark Alekseïev, went to this detention center on Monday, but was informed by his employees that the two men did not want to benefit from his services. Mark Alekseev denounced the illegality of the detention of the two men. “In reality, we can say that these citizens have been kidnapped,” he said.

“A violation of all legal” standards

“It is a violation of all legal standards”, protested Mark Alekseïev, after being refused access to Salekh Magamadov and Ismail Issaïev. On Sunday, a close associate of the Chechen leader Ramzan Kadyrov, Akhmed Doudayev, assured that the two men had “confessed to having provided aid to a member of an illegal armed group”, killed during an operation of the anti-terrorist forces on January 20.

Lawyer Mark Alekseïev for his part accused the authorities of having “deliberately disseminated false information on the fate” of the two young men. According to him, “the confession was most likely obtained through threats and pressure.” Saturday, LGBT Set had said he feared that the two men, one of whom is a minor, are “in danger of death” in Chechnya.

They had been evacuated with the help of this NGO in July 2020 out of this Russian Caucasian republic with a Muslim majority and led with an iron fist by Ramzan Kadyrov. According to his spokesperson, Tim Bestsvet, they had been arrested for the first time in the spring of 2020, “initially for their sexual orientation” and forced to record filmed apologies, during which they said “not to be men”.

Chechnya is regularly accused of serious violations of the rights of political opponents, women and LGBT people. The Russian opposition newspaper Novaya Gazeta, followed by several NGOs, revealed in 2017 that homosexuals were arrested there and sometimes tortured and murdered by the police.

After six years of work, the new port “offers new perspectives for Hauts-de-France”

Four schoolchildren under 12 vaccinated “by mistake”