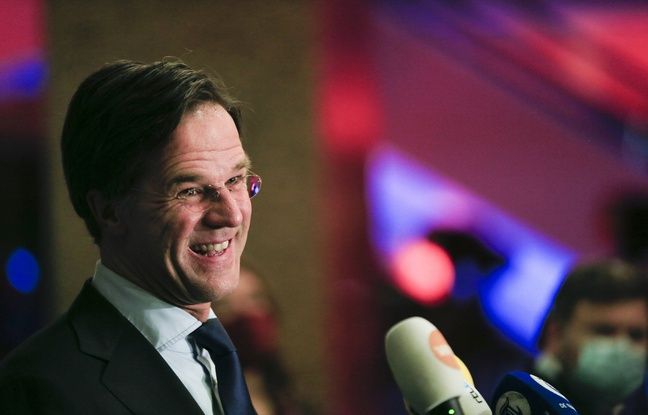 Successful bet for Mark Rutte, who should be back for a 4th term. The Dutch Prime Minister welcomed a “massive vote of confidence” on Wednesday, after three days of legislative elections dominated by the Covid-19 pandemic and the controversy over the curfew, and in which his party emerged victorious , according to exit polls.

“I note that the result of this election is that the voters of the Netherlands gave my party a massive vote of confidence,” Rutte told reporters in parliament in The Hague.

The outgoing Prime Minister’s Liberal party won the election, which should allow him to lead his fourth government coalition, according to polls.

In power since 2010, Rutte assured to have “energy for another 10 years”. The exit polls credited the Liberals with 36 seats out of 150 in the lower house of parliament, against 33 in the outgoing assembly, and attributed 27 seats to D66 (center left) and 17 to the Freedom Party (PVV) anti-Islam deputy Geert Wilders, with whom the main parties have already ruled out forming a coalition. The second largest party in the country before these elections, the PVV lost three seats, a disappointing result for its leader, who told reporters to have “hoped for more”.

With 27 seats, or 8 more, the pro-European progressives of the D66 won the biggest victory in the history of the party, led by the Minister of Foreign Trade and Development Cooperation, Sigrid Kaag. “I see the confidence we have received as confirmation that we are the only progressive party to have wielded influence in recent years,” said Sigrid Kaag, who appeared dancing standing on a table in a photo posted on Twitter.

What a wonderful evening. Your support for our ideals and ideas is overwhelming. I am very grateful.

I would of course also congratulate the other winners tonight. Get started now, the future does not wait.

Mark Rutte said it was likely that negotiations to form a new coalition government will be with the D66 and CDA (Christian Democrats) of Finance Minister Wopke Hoekstra, which has 14 seats. The PvdA (Social Democrats) won 9 seats, and the environmentalists of Groenlinks and the radical left of the SP 8 seats each. The party of populist Thierry Baudet, the Forum for Democracy, would do a good deal by also winning 8 seats, against 2 currently.

“I am proud of what we have achieved over the past 10 years in the Netherlands,” one of the best performing economies in Europe, Mark Rutte told reporters before voting. “The main question during these elections is who can best lead this country through the coronavirus crisis,” he added.

A record number of 37 parties contested for 150 seats in the lower house of parliament, in a fragmented political landscape that forces complex coalitions.

Nicknamed the Prime Minister “Teflon” for his ability to emerge unscathed from political crises, Mark Rutte was nevertheless forced to resign in January after thousands of parents were wrongly accused of fraud in family allowances. His government, however, remained in place to take care of day-to-day business.