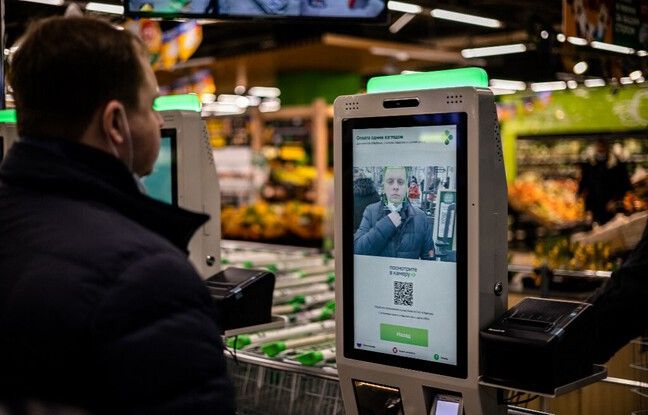 The Russian X5, the country’s leading distribution group, announced on Wednesday the launch of facial recognition payment, the latest example of the rapid development, and for some controversial, of this technology in Russia. The X5 group, to which the ubiquitous supermarket chains Perekrestok and Pyaterotchka belong in particular, has joined forces with the Visa payment system as well as with Sberbank, the leading Russian bank and state institution that is now changing into a digital giant. .

The number of supermarkets connected to the system should be increased from 52 this week to 150 by the end of March, said Ivan Melnik, innovation director at X5. “After April the implementation will be faster. By the end of 2021, the service will be available on 12,000 to 14,000 devices in a total of 3,000 stores across Russia, ”he said. In a Moscow supermarket on Tuesday, the service appeared to be gaining acceptance among several young customers, but aroused more suspicion among older people.

“It’s great because the 21st century is the era of technology,” says Andrei Epifanov, 28, employee of the private bank Alfa Bank. “For the elderly, of course, it’s new” and can lead to “a lack of confidence” he concedes, “but I find this idea very cool”. This service is available immediately at the self-service checkouts of the supermarkets concerned and for Sberbank customers only.

“It’s practical, you don’t have to carry your wallet or take your phone out of your pocket, you just have to press a button and pay with your face,” explains Ivan Melnik. It also ensures that these transactions are “safe, secure, encrypted”, and identity theft attempts excluded thanks to a 3D camera that measures the depth of the face.

Facial recognition is developing rapidly in Russia. Since the start of the pandemic, this technology has been used in particular by the city of Moscow – and its tens of thousands of surveillance cameras – to monitor compliance with containment and quarantines. The association for the defense of digital freedoms Roskomsvoboda launched a campaign and a petition last year against the massive use of facial recognition by the authorities, pointing to abuses, data leaks and a lack of consent.