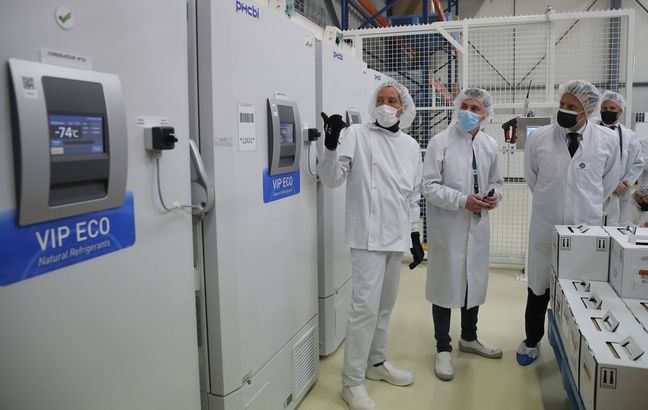 Emmanuel Macron wore charlotte and a white coat on Friday to visit the Delpharm group’s factory in Eure-et-Loir, the first in France to bottle Pfizer / BioNTech’s vaccine against Covid-19. If France does not have a French vaccine, the State has helped Delpharm to set up in five months this line for bottling the vaccine manufactured by BioNTech in Marburg (Germany). Several other French sites will also soon subcontract for American and European vaccines.

“Four sites in France will produce on our soil 250 million doses of vaccines for France and other European countries. We will continue to increase our independence in this way, ”declared the Head of State after his visit. For this operation, Delpharm, which has 17 sites and 4,700 employees, hired 60 additional people and invested 20 million euros in its Saint-Rémy-sur-Avre site, including 10.4 million provided by the State.

The group will receive an additional 20 million to release on its Tours site “pre-filled syringes” of the BioNTech vaccine, one of the most effective messenger RNA vaccines. Asked by the press, the Head of State once again admitted that France had missed the boat with these new vaccines. While “the American program has burnt all the stages which was that of the messenger RNA”, “on this we must fully recognize it, this shift, we took it less quickly”, he said.

But “from the month of June 2020, at a time when our scientists told me that we would never have a vaccine in the year and (that) myself I told you, we have invested in these programs” contract manufacturing, he argued. He also assured that France could eventually “produce several French vaccines, the Sanofi vaccine, which is still advancing, and the Valneva vaccine”. This Nantes biotech is recording encouraging first results for its vaccine, already ordered by the United Kingdom, while the EU is still negotiating.

After Delpharm, the company Recipharm will bottle Moderna vaccines in Indre-et-Loire, the company Fareva will take care of the CureVac vaccine – not yet approved in the EU – in Eure and the Pyrénées-Atlantiques and Sanofi will bottle from this summer the vaccine of its competitor Johnson & Johnson, near Lyon. These sites are all supported by the 200 million euros “Capacity building” call for projects announced by Emmanuel Macron in June 2020 and led by the Minister for Industry Agnès Pannier-Runacher who accompanied the visit.

The visit of the Head of State comes as the High Authority for Health has just recommended, for those under 55 who have received a dose of AstraZeneca vaccine, that their second dose be a messenger RNA vaccine. The Head of State, however, defended the AstraZeneca vaccine for the elderly, citing the opinion of the European authority which cites a “completely positive” benefit / risk advantage for those over 60 years old. “We are awaiting the opinion of the French authority” in the next few days, “he noted.

“You know, every day, the drugs you take have such risks and sometimes with statistical risks which are pretty much what we are talking about for the AstraZeneca vaccine,” added the Head of State. There is no question of doing without this vaccine, he believes. “We have a schedule for the delivery of orders, with commitments made on our vaccination campaign which means that we now need all the families of vaccines.”