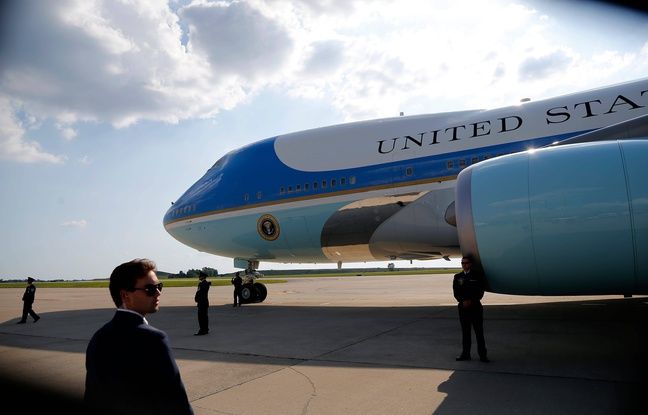 It was a guard distracted by his personal problems that allowed an intruder to enter the military base that houses the Air Force One presidential plane last month. This is indicated by an internal US Air Force investigation made public on Thursday.

The individual, whose identity has not been disclosed, spent more than five hours at the Andrews military base near Washington. He boarded an official plane and was only arrested for wearing a funny hat, US Air Force Inspector General Sami Said told reporters.

The investigation into this incident, which took place on February 4, revealed a chain of errors after the initial break-in. It is on the Andrews base, which welcomes foreign dignitaries visiting Washington, that the official American planes, in particular the presidential plane Air Force One, are stationed. Security measures are therefore particularly strict and entries are filtered by guards who verify the identities of each person.

But that day, a guard who said he was “distracted by personal problems” did not check the papers of the man who arrived by car at one of the entrances to the base reserved for staff, according to the report. ‘Inspector General. The individual then wandered around the base for several hours, by car and then on foot, before ending up in the terminal reserved for distinguished visitors. When asked what he was doing there, he left and walked towards the tarmac, which should have been protected by wire mesh doors.

He boards a plane

But exactly that day, a door was not closing properly and he managed to slip into the opening. He then walked on the tarmac to a C-40, a military version of the Boeing 737, with crew members in training. They, thinking that it was an authorized person, did not ask him any questions. He remained on board for a few minutes before leaving and it was only when he got off the plane that he was arrested, an aviator having found it suspicious to see an individual wearing a pink hat with pompoms walking on the base.

Although his actions could not be established for several hours, the Inspector General said he was “100%” sure that the man was never able to approach Air Force One. “Physically, it was very far, but above all the security checks that this individual would have had to pass before approaching the presidential plane are such that it is impossible for him to have been able to cross them,” he said. -he rocks. This area is exceptionally safe ”. The man, who had no aggressive intentions, is being prosecuted for illegally entering the base. The distracted guard was sanctioned, said the inspector general without specifying the nature of the sanction.