Maori deputy expelled from parliament for failing to wear tie 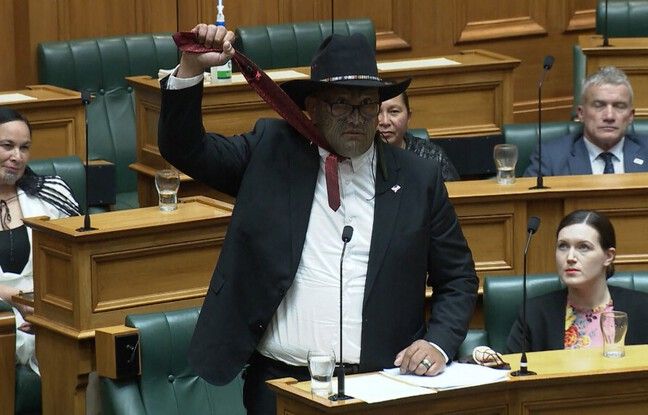 The Parliament of New Zealand backtracked on Wednesday, the day after the expulsion of a Maori lawmaker who refused to wear a tie, and allowed him to speak without this accessory he called “a knot colonial ”. The problem arose on Tuesday when this co-leader of the Maori Party was kicked out of the chamber for not wearing the required dress during the question period.

Rawiri Waititi, who has a traditional Maori or Ta moko tattoo all over his face and wears a black cowboy hat, defended himself by claiming to wear traditional Maori attire for this type of function. “It is not a matter of tie but of cultural identity,” said the parliamentarian, leaving the hemicycle, who sees in this accessory “a colonial knot”. The Maori population makes up about 15% of New Zealand’s five million inhabitants.

The rules could be changed

It is the most disadvantaged in the country, with rates of poverty, unemployment and incarceration higher than those of the average population. For many Maori, these injustices date back to when New Zealand was a British colony. Rawiri Waititi said the issue of wearing the tie was indicative of race relations that still need to improve in this South Pacific country. “It is a violation of the rights of indigenous peoples, we (must) have the freedom to express our cultural identity in a space like this,” he said.

Prime Minister Jacinda Ardern said she saw no objection to parliamentarians not wearing the tie. “There are much bigger questions for all of us,” she said. After having strictly applied the dress code on Tuesday, the Speaker of Parliament, Trevor Mallard, was much less strict this Wednesday during the speech of Rawiti Waititi, who was still not wearing a tie.

Instead of expelling him, Trevor Mallard simply let him ask a question, later claiming that a change in the regulations was being considered. Rawiri Waititi was first elected to Parliament last year. In his first speech, he recounted how one of his ancestors was wrongly hanged by the British for murder.

The sanctions are “proportionate”, according to the Minister of Sports