Mario Draghi is sworn in to lead the country 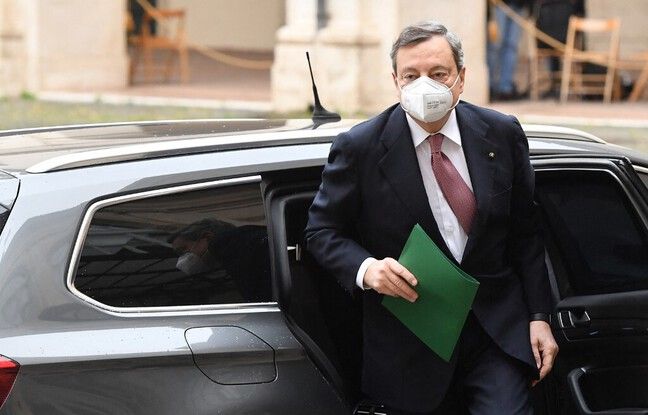 “Super Mario” takes the affairs of Italy in hand. Nicknamed for his role in the euro zone debt crisis in 2012, Mario Draghi was sworn in on Saturday after securing a large parliamentary majority the day before and presenting his government, with the mission of getting Italy out. political and health crises. He will appear before the Senate on Wednesday, then before the Chamber of Deputies on Thursday for the vote of confidence that will give his government final legitimacy.

The ex-president of the ECB, who succeeds Giuseppe Conte, forced to resign after the breakup of his coalition, has chosen a man of confidence, Daniele Franco, for the key Ministry of the Economy. At 67, the latter is considered one of the best public finance experts in the peninsula, and has spent most of his career with the Bank of Italy, of which Mario Draghi was governor, until become number two in early 2020.

“I swear to be loyal to the Republic”, declared the former president of the European Central Bank (ECB), during the inauguration ceremony in front of President Sergio Mattarella, broadcast live by television from the presidential palace .

In addition to the key position of the Economy, Mario Draghi played continuity in several important positions: he thus confirmed Luigi Di Maio, senior official of the Populist Movement 5 Stars (M5S), as Minister of Foreign Affairs, the technocrat Luciana Lamorgese to that of Minister of the Interior and Roberto Speranza, from the small left-wing party LEU, to Health. The new head of government has skillfully mixed technocrats and political leaders, choosing competent personalities from all the parties that have offered him their support, without however appealing to the leaders.

Towards the creation of a “super-ministry” of the ecological transition

He also announced the forthcoming creation of a “super-ministry” of the ecological transition which will be headed by a renowned physicist, Roberto Cingolani, responsible since September 2019 for technological innovation at the Italian aeronautical giant Leonardo.

Since Sergio Mattarella called on him on February 3, Mario Draghi has conducted all-out talks with the political parties represented in parliament, which allowed him to form a motley team ranging from the Democratic Party (PD, center-left) to the far-right League of Matteo Salvini via the right-wing Forza Italia party of Silvio Berlusconi. Thursday, in extremis, the unclassifiable 5 Star Movement, anti-system until it came to power, had also given the green light, thus bringing down the last obstacle to a government of national unity.

A damn economy in the red

The difficulties have only just begun, however, for this affable 73-year-old Italian renowned for his discretion, his seriousness and his determination.

Italy, which is approaching the threshold of 100,000 deaths from Covid, recorded one of the worst drops in GDP in the euro zone in 2020, with a plunge of 8.9%. The third largest economy in the area relies heavily on the windfall of more than 200 billion European funds, conditioned on the presentation in Brussels by the end of April of a detailed expenditure plan. “But it’s not enough to spend the funds. The European Commission expects spending to go hand in hand with reforms, ”according to an analysis by the Center for European Reform (CER).

At the top of the priorities is also the acceleration of the vaccination campaign, affected as in other European countries by delays in supply. Only 1.2 million Italians out of 60 million have been vaccinated. Even if he benefits for the moment from his aura of “savior of the nation”, this man with pepper and salt hair trained by the Jesuits, whose arrival has delighted the financial markets, will have to show a lot of skill. to stay in the saddle over the long term in the face of political parties which should be increasingly agitated as the next elections approach, scheduled for 2023.