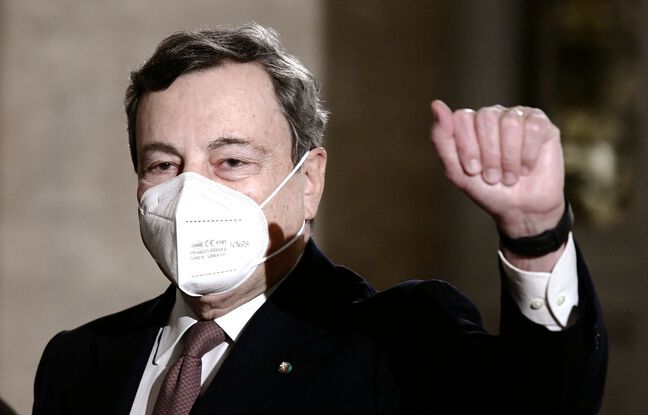 It’s now official. Former European Central Bank President Mario Draghi officially accepted on Friday to become Prime Minister of Italy, after securing a large parliamentary majority. He announced in the wake of the composition of his government, where politicians and technocrats must take up a country hard hit by the health crisis.

Draghi, chosen by President Sergio Mattarella to succeed Giuseppe Conte, forced to resign after his coalition broke up, has chosen a trusted man, Daniele Franco, for the key economy ministry.

Franco, 67, considered one of the best public finance experts on the peninsula, spent most of his career at the Bank of Italy, of which Mario Draghi was governor, until becoming its number two early 2020.

Mario Draghi, however, played continuity in several other important posts: he thus confirmed Luigi Di Maio, senior official of the 5 Star Populist Movement (M5S), as Minister of Foreign Affairs, technocrat Luciana Lamorgese as Minister of ‘Interior and Roberto Speranza, from the small left-wing LEU party, as Minister of Health.

The new head of government has skillfully mixed technocrats and political leaders, choosing competent personalities from all the parties that have offered him their support, without however appealing to the leaders.

Support from the main political parties

He also announced the forthcoming creation of a “super-ministry” of the ecological transition which will be headed by a renowned physicist, Roberto Cingolani, responsible since September 2019 for technological innovation at the Italian aeronautical giant Leonardo.

Draghi, nicknamed “Super Mario” for his role in the euro zone debt crisis in 2012, will be sworn in on Saturday, then seek the confidence of Parliament earlier this week. Since Sergio Mattarella called on him on February 3, Mario Draghi has conducted all-out talks with the political parties represented in parliament, which allowed him to form a motley team ranging from the Democratic Party (PD, center-left) to the far-right League of Matteo Salvini via the right-wing Forza Italia party of Silvio Berlusconi.

Thursday, in extremis, the unclassifiable 5 Star Movement (M5S), anti-system until it came to power, had also given the green light, thus bringing down the last obstacle to a government of national unity. The difficulties have only just begun, however, for this affable 73-year-old Italian renowned for his discretion, his seriousness and his determination.

Priority to contain the epidemic

Italy, which is approaching the 100,000 death mark from Covid-19, recorded one of the worst GDP drops in the euro zone in 2020, with a plunge of 8.9%. The third largest economy in the area relies heavily on the windfall of more than 200 billion European funds, conditioned on the presentation in Brussels by the end of April of a detailed expenditure plan.

At the top of the priorities is also the acceleration of the vaccination campaign, affected as in other European countries by delays in supply. Only 1.2 million Italians out of 60 million have been vaccinated.

Other projects that have remained in the pipeline for decades await Mario Draghi on his desk at Palazzo Chigi, seat of government in the center of Rome: remedy the slowness of justice, tackle bureaucracy by making the administration more efficient , and launch the ecological transition, which will be coordinated by a full-fledged ministry, the first of its kind in Italy.

The profession must be better paid and benefit from a specific status, according to a report

Novak Djokovic in the final, one step away from the Grand Slam