Merkel calls for accelerating the fight against climate change 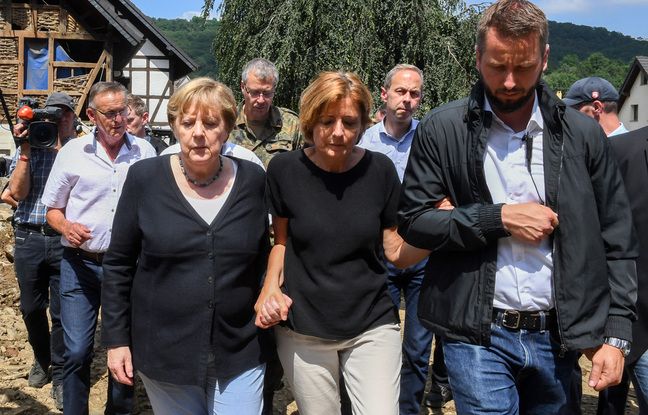 Angela Merkel on Sunday discovered the “surreal” devastation left by the floods in Western Europe, which killed at least 184 people in Germany and Belgium. A toll that grows every day with many people missing.

The chancellor, hiking shoes on, took nearly an hour to survey the village of Schuld, not far from Bonn, where the Ahr river turned into fury and destroyed part of the town. This area of ​​Rhineland-Palatinate, in southwestern Germany, is one of the worst affected regions and deplores the loss of 110 people, out of a total of 157 in the country. In Belgium, 27 people died.

Demonstrating her emotion on several occasions, Angela Merkel spoke with locals who have lost everything, taking full measure of the biggest natural disaster in recent German history.

The Chancellor was visiting Washington at the time of the deadly floods, on the night of Wednesday to Thursday.

“I would almost say that the German language has a hard time finding the words to describe the devastation that has been caused,” said Angela Merkel, shocked at the sight of collapsed roads and bridges, gutted houses, torn trees, mountains of muddy debris.

She promised that “the federal government and the regions will act together to gradually restore order” in the devastated areas.

From Wednesday, emergency aid of at least 300 million euros will be presented to the Council of Ministers, before a vast reconstruction program of several billion euros, according to Finance Minister Olaf Scholz.

If the trend is declining in the west of the country, the situation deteriorated on Saturday evening, further south on the border between Germany and Austria. These floods in Bavaria left one dead.

A “disaster plan” has been decreed in the German district of Berchtesgaden and several hundred firefighters are deployed.

In Austria, the old town of Hallein is flooded and firefighters are on alert in the Salzburg and Tyrol regions. On the eastern border of the country, between Germany and the Czech Republic, rivers also overflowed into the Saxony region on Saturday evening.

Pope Francis on Sunday expressed his “solidarity” with the populations affected by these bad weather, which also caused damage in the Netherlands and Luxembourg.

In Germany, rescuers continue to search for the missing using helicopters, boats and specialized divers.

“We’ve lived here for over 20 years and we’ve never experienced anything like it,” says Hans-Dieter Vrancken, a 65-year-old resident of the village of Schuld visited by Angela Merkel. “It’s like war,” he sums up.

More than 300 people were still missing on Saturday evening in the canton surrounding the city of Bonn (North Rhine-Westphalia) which has nearly 600,000 inhabitants.

The head of the German Association of Towns and Municipalities, Gerd Landsberg, called on Sunday to modernize local warning systems, lamenting that “at first this disaster gave the impression that it was about heavy rains, without the dramatic extent being communicated ”.

With a little more than two months of the legislative elections, at the end of which Angela Merkel will leave power, each candidate is competing for proposals to strengthen the fight against global warming, cause for many experts of the floods.

“I am not saying that a flood is the example of climate change, but if we look at the damage of recent years, it is simply more important than in the past”, also noted Angela Merkel, calling for a ” very great effort ”. “We must hurry, we must be faster in the fight against climate change,” said the Chancellor.

The favorite to succeed the Chancellor, the conservative Armin Laschet, made a mistake on Saturday by being filmed hilariously during a tribute by the Head of State to the victims of the floods.

In the face of national outrage, Armin Laschet, also leader of the North Rhine-Westphalia region, apologized.

In all the affected localities, firefighters, civil protection, municipal officials, soldiers, are engaged in a colossal work of clearing and cleaning the piles of muddy debris which often obstruct the streets.

Release a book, the ultimate weapon of the campaign candidate?