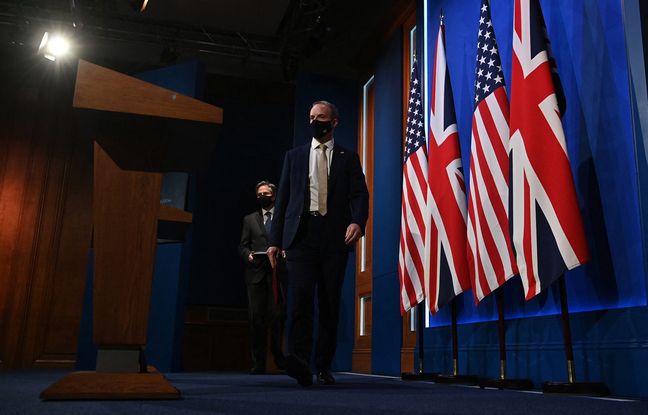 It has been over two years since they last saw each other in person. G7 foreign ministers are meeting in London on Tuesday to agree on joint responses to global threats. China, Burma, Libya, Syria and Russia are on the agenda of discussions between the heads of diplomacy of the club of rich countries, before the summit of heads of state and government next month in southwest England .

They will also discuss the violence in Ethiopia, Iran and North Korea, Somalia, the Sahel and the Balkans, as many “pressing geopolitical problems which undermine democracy, freedoms and human rights”, according to London.

British Foreign Minister Dominic Raab met his US counterpart Antony Blinken on Monday, both calling for a unified approach. “The UK Presidency of the G7 is an opportunity to bring together democratic and open societies and show unity when it is most needed to face common challenges and growing threats,” Dominic Raab said in a statement.

The US Secretary of State reaffirmed the US commitment to a “rules-based international order” to address issues ranging from climate change to post-pandemic recovery.

The meetings between the participants take place according to a strict protocol due to the pandemic, with small delegations, masks, distance and transparent walls. The UK, which has mourned more than 127,500 deaths since the start of the pandemic, is gradually easing its restrictions as the vaccination campaign progresses and cases decline, even as other countries experience new peaks.

These disparities have prompted calls for greater international action, including greater access to vaccines. “None” of the “challenges we face” can “be effectively met by a single country acting alone – even the United States, even the United Kingdom,” Antony Blinken said Monday at his press conference with Dominic Raab.

The heads of diplomacy of Germany, Canada, the United States, France, Italy, Japan and the United Kingdom will be joined by representatives of the European Union. India, Australia, South Korea, South Africa and the Association of Southeast Asian Nations (Asean) were also invited.

Since leaving the European Union last year, the UK has turned to the Asia-Pacific region. He also wants broader and stronger global commitments to fight climate change, as she prepares to host the United Nations Climate Change Summit (COP26) in November. Building on their special relationship, London and Washington have adopted common approaches to foreign policy, especially towards Russia and China.

The repression of the Uyghur minority denounced

After the meeting, which is being held in London until Wednesday, the US Secretary of State travels to Kiev to demonstrate US “unwavering” support for Ukraine following the deployment of Russian troops to the border, on bottom of strained relations with Moscow. On Monday, Antony Blinken called on Pyongyang to embark on the path of diplomacy, with Washington keen to counter North Korea’s nuclear ambitions.

Regarding China, denounced for the repression of the Uyghur minority and the pro-democracy movement in Hong Kong, Dominic Raab said the “door was open” to improved relations. “But it depends on behavior and actions,” he added. As for Burma, participants will discuss the February 1 coup and receive a situation report. Dominic Raab should urge partners to take tougher measures against the military junta, including broader targeted sanctions.