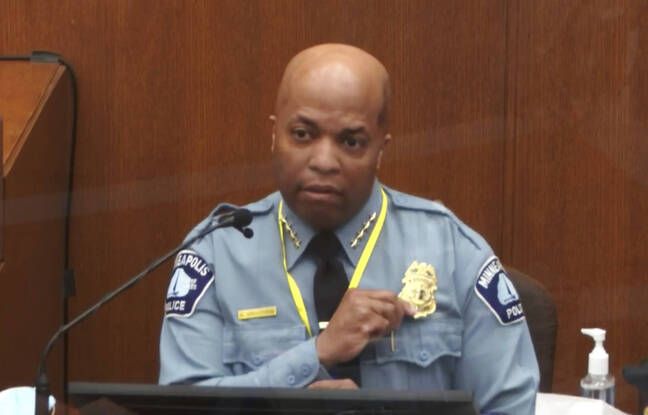 It was testimony that gave the defense a terrible time at the George Floyd death trial. The Minneapolis law enforcement chief overwhelmed his former agent Derek Chauvin on Monday, saying he had “violated the rules” of the police during the controversial arrest.

According to Medaria Arradondo, kneeling on George Floyd’s neck “might be reasonable in the first few seconds to control him, but not after he had stopped putting up resistance, and especially not after he had passed out” . And to give even more weight to his statements, the police chief came to testify in uniform on the sixth day of this extraordinary trial.

“This is not part of our policy, of our training and is certainly not in accordance with our ethics, our values,” asserted this 54-year-old man, who has been in charge of the police of the northern metropolis for three years. United States.

To subdue George Floyd on May 25, Derek Chauvin knelt on his neck and held pressure for nearly ten minutes. Faced with the global outcry, Medaria Arradondo quickly dismissed these agents, while strongly criticizing their action. “The tragic death of George Floyd was not due to a training problem (…) It was a murder,” he wrote in a press release in early June.

On Monday, his attack was even more indirect. He first insisted on the importance for the 700 or so officers serving in Minneapolis to show “compassion and dignity.” He then stressed that the use of force should be reserved for violent crimes and that the acts alleged on May 25 did not fall into this category. He also criticized Derek Chauvin for not having “reassessed” George Floyd’s state of health during his speech. For all these reasons, he “vehemently denies that there was an appropriate use of force in this situation”.

Chauvin released by the Police Academy

Derek Chauvin’s lawyer, Eric Nelson, however, snatched a concession from Medaria Arrandondo. In an image captured when an ambulance arrived, he admitted that Derek Chauvin no longer had his knee on his neck, but on George Floyd’s shoulder. Me Nelson therefore continues to maintain that his client did not cause the death of the forty-something and that he died of an overdose. It is based on the presence of fentanyl and methamphetamine, discovered during the autopsy of George Floyd who, however, identifies “neck compression” as the cause of death.

Former Minneapolis Police Academy official Katie Blackwell also dealt a blow to the defense. Asked to comment on a photo from the drama, where we see Derek Chauvin kneeling on George Floyd’s neck, she said, pithy: “I don’t know what kind of position he improvised, but it’s not something. thing we teach ”. The hearing will resume this Tuesday and should last two or three more weeks.