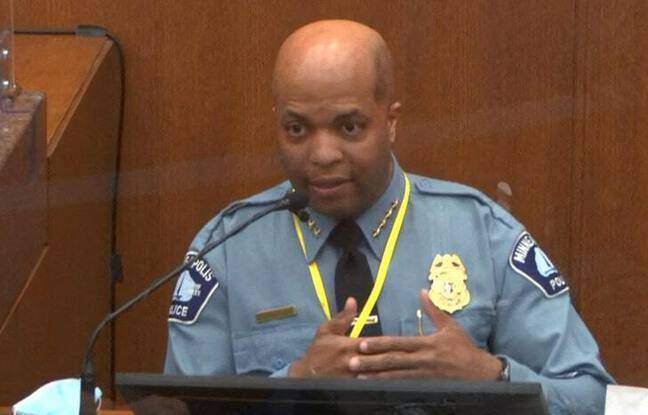 Exceptional fact during the trial of a police officer in the United States: the head of the police force of Minneapolis testifies Monday against the white agent Derek Chauvin, tried for the murder of the African-American George Floyd.

In uniform, Medaria Arradondo, a 54-year-old black man who has headed the police force in this large city in the north of the United States for three years, first spoke of the importance of treating the population “with compassion” and “with dignity. “. He was summoned by the prosecution to this extraordinary trial, after a first week of often moving testimony that captivated America.

“It was a murder”

In June, he had carried a virulent charge against Derek Chauvin and his colleagues. “The tragic death of George Floyd was not due to a training problem (…). The agents knew what was happening, one of them intentionally caused it, the others failed to prevent it – it was murder, ”he wrote in a statement.

In the United States, police officers who use excessive force are rarely let go by their superiors and, on the contrary, benefit from collective contracts, negotiated by their union, which are very protective. They are also very rarely prosecuted and even less often found guilty.

On May 25 in Minneapolis, in the north of the United States, the four police officers wanted to arrest George Floyd, suspected of having passed a false 20 dollar bill. To control him, they handcuffed him and pinned him to the ground. Derek Chauvin then knelt on his neck for nearly ten minutes.

The 45-year-old white man, released on bail, has been on trial for a week for murder. The trial of his three former colleagues, accused of aiding and abetting murder, is scheduled for August.

He pleads not guilty and ensures, on the one hand, to have followed a procedure in accordance with his training to control a recalcitrant suspect; on the other hand, not having caused the death of George Floyd, who he claimed was killed by an overdose.

His first line of defense has already been weakened last week by two former superiors, one of whom deemed “absolutely unnecessary” or “unjustified”, the “deadly” force used to challenge George Floyd. Medaria Arradondo’s testimony risks dealing a further blow to him.

Autopsy identifies neck compression as cause of death

The other argument is based on the presence of fentanyl, a powerful opioid, and methamphetamine, discovered during the autopsy of George Floyd who, however, identifies “neck compression” as the cause of death.

As a foretaste of the debate between experts, the prosecution called on Monday morning the emergency doctor who, after half an hour of unsuccessful efforts to revive the African-American, declared him dead.

Bradford Langenfeld estimated that, on the basis of the evidence at his disposal, he had thought that “the lack of oxygen” or “asphyxiation” was “the most likely cause of death” of the forty-something. Derek Chauvin’s attorney, Eric Nelson, asked him if drug use could cause oxygen starvation. “Yes,” replied the doctor. Mr. Nelson then went on to technical questions on the effects of fentanyl, which makes breathing difficult.

Last Monday, Courteney Ross, a 45-year-old white woman who had an intimate relationship with George Floyd from 2017 until his death, spoke of their shared addiction to opiates and also underwent intense cross-examination.

The trial is still to last two or three weeks. Jurors will deliver their verdict in late April or early May. If they are not unanimous, the trial will be declared null and void, and the procedure will have to start from the beginning. Such a hypothesis arouses strong fears in Minneapolis, which had already flared up after the death of George Floyd.