More than 150 fires ravage the west of the country, thousands of residents evacuated 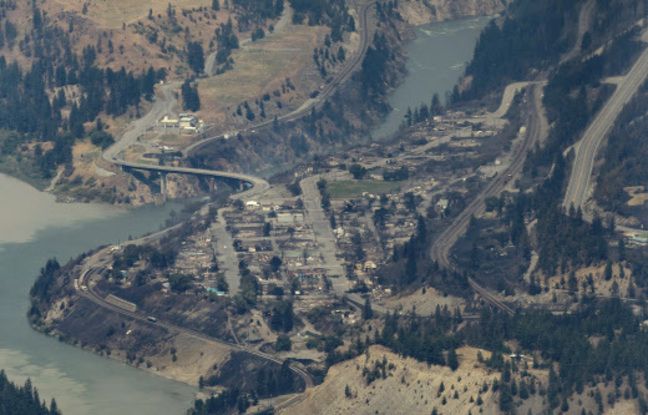 152, of which 89 in the last two days. Serial fires continue to rage in western Canada (British Columbia) and California, adding to an unprecedented heat wave that has claimed hundreds of lives. In Canada, these fires were identified in particular north of the city of Kamloops, located 350 km northeast of Vancouver and a thousand people were evacuated Thursday in the province.

“The dry conditions and extreme heat in British Columbia are unprecedented,” Public Safety Minister Bill Blair said during a press briefing, anticipating a “long and difficult summer”. The village of Lytton, some 250 km northeast of Vancouver, is now famous for having this week set a national heat record of 49.6 degrees, was 90% destroyed. The 250 residents were evacuated Wednesday evening due to a fire that spread very quickly.

Lytton resident Jeff Chapman told English channel CBC that he watched helplessly as his parents died in the town fire after a utility pole fell on the shelter they had taken refuge in. . “I can only stress that the risk of fire is currently extreme in almost all parts of British Columbia and I urge British Columbians to listen carefully to authorities and follow directions,” he said. asked Provincial Premier John Horgan.

The heat wave continues in the prairies of central Canada. In addition to British Columbia, heat wave warnings have been issued for the provinces of Alberta, Saskatchewan, Manitoba, as well as part of the Northwest Territories, and now northern Ontario. The US states of Washington and Oregon, across the border, also suffocated this week in record temperatures.

Hundreds of firefighters were working on Friday to contain three wildfires that devoured more than 15,000 hectares in northern California, including in a tourist area that was preparing to welcome many visitors for the long weekend. of the American National Day July 4th. More than 500 lightning bolts have been recorded in California in the past twenty-four hours, threatening to cause more fires to start.

Experts estimate that this heat wave killed nearly 700 people in Canada and at least 16 in the United States, was caused by global warming.