More than 20,000 demonstrators in support of Palestinians across France 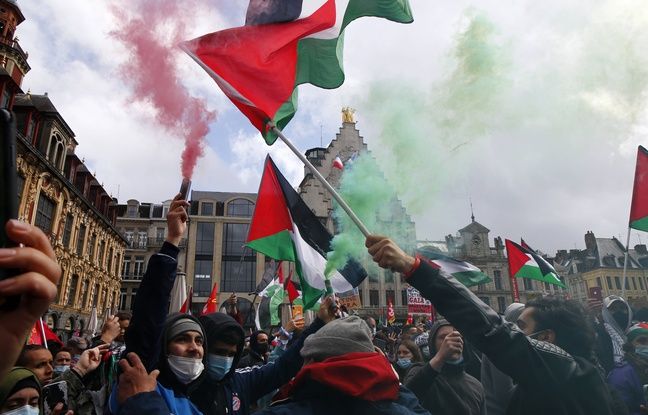 About 22,000 people, according to the Interior Ministry, gathered in support of the Palestinians on Saturday across France, in places despite the ban by the authorities, such as in Paris where sometimes tense face-to-face meetings pitted demonstrators and law enforcement.

In the capital, where the last demonstrators were dispersed Porte de Clignancourt by the police shortly after 7 p.m., between 2,500 to 3,500 people according to the authorities – 4,500 to 5,000 according to the organizers – gathered in small groups in the district of Barbès.

According to the ministry, support for the Palestinian people was also 18,500 in other provincial towns, where 59 rallies took place.

51 arrests, two injured in the police

A total of 51 people were arrested, including 44 in Paris where, according to provisional figures from the prosecution, 15 people were in police custody in the early evening, in particular for “participation in a group formed for violence”, “participation to a gathering after summons ”and“ violence against the police ”.

There were two “light injuries” among the police (one in Nice, one in Paris), according to the Interior Ministry.

Gatherings in many cities

Other events were banned, such as Aubervilliers and Montreuil in Seine-Saint-Denis. In Nice, some 150 people gathered in peace despite the ban. Likewise in Grenoble, where around 200 people demonstrated.

In Paris, where the demonstration had not been authorized either, face-to-face, sometimes tense, opposed for several hours, demonstrators and the police, noted AFP journalists.

Police charges, repeated use of water and tear gas cannons, throwing of various projectiles by demonstrators, dustbin fires…. A “cat and mouse game” between the two parties on wide boulevards or narrower streets punctuated the afternoon.

A massive police deployment – 4,200 police and gendarmes mobilized with instructions for “immediate” dispersal – prevented the demonstrators who had an appointment and planned to go to Bastille, from deploying a procession.

A total of 367 people were fined in the capital, according to the Interior Ministry.