More than 3,000 refugees in Rwanda to flee the eruption of a volcano 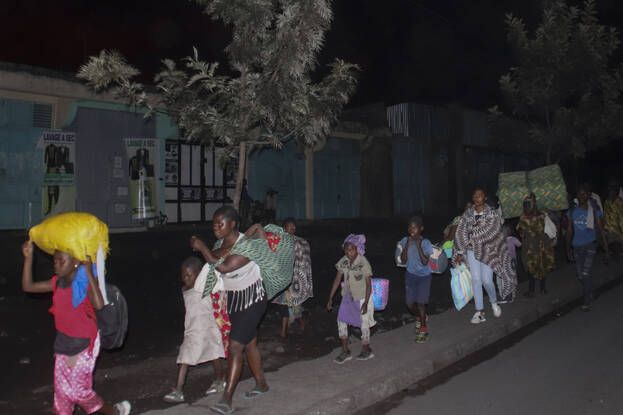 At least 3,000 people from Goma, in the east of the Democratic Republic of Congo (DRC), fled overnight from Saturday to Sunday to Rwanda after the eruption of the Nyiragongo volcano, the agency said on Sunday. public television. The Nyiragongo, which overlooks Goma, erupted on Saturday evening, prompting the Congolese government to order the evacuation of the city whose inhabitants were fleeing en masse, especially to Rwanda.

The Rwanda Broadcasting Agency (RBA) posted photos showing many people on the march, some carrying suitcases or mattresses, and accompanied by the comment: “Thousands of Congolese and residents of the border town of Goma arriving in the city from Rubavu, Rwanda. On either side of the border, the towns of Goma and Rubavu are very close. An “emergency plan” has been put in place by the authorities in Rubavu, RBA specifies.

“The Rwandan borders are open”

“Rubavu district authorities told RBA that people arriving from Goma will be accommodated in schools and places of worship that have been prepared to accommodate those fleeing the Nyiragongo eruption,” RBA adds. “The Rwandan borders are open and the reception of our neighbors is going peacefully. There was no blockage whatsoever but rather the organization of coordinated entries and dispatching, ”said around 2:00 am local time on Twitter, Vincent Karega, the Rwandan ambassador in the DRC.

In the early evening on Saturday, glowing lights began to escape from the crater of the volcano and a smell of sulfur pervaded Goma, located on its southern flank, on the shores of Lake Kivu. Regional capital of North Kivu, Goma has nearly 600,000 inhabitants, for twelve districts. The authorities’ evacuation plan foresees that two-thirds of them will go to Rwanda. The previous major eruption of Nyiragongo dates back to January 17, 2002. It killed more than 100 people, covering almost the entire eastern part of Goma with lava, including half of the airport runway.