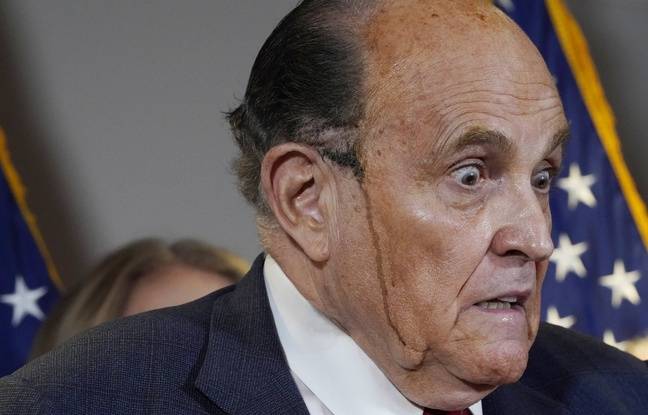 Donald Trump had promised that his lawyers would unveil “a clear road to victory”. Instead, we attended a surrealist press conference in which Rudy Giuliani denounced, still without proof, “a national conspiracy” and “massive fraud”. Excited, the former mayor of New York imitated Joe Pesci in Mon cousin Vinny and sweated so much that the dyeing of his hair betrayed him.

Before a federal judge in Pennsylvania, Rudy Giuliani had nevertheless recognized that the appeal filed in this state “was not a complaint for fraud”. But facing the cameras, the former mayor of New York repeated that the US presidential election had been marred by “massive fraud”, denouncing a “national conspiracy”. Problem, he has provided no evidence of his so-called deceased voters’ votes or a machine mysteriously changing a vote from Trump to Biden. He promised he would present material “later”.

Rudy Giuliani reiterated that observers were unable to approach the count – a point that the Pennsylvania Supreme Court refuted. It was at this point that “mister mayor” imitated Joe Pesci in Mon Cousin Vinny, who, in court, asks “How many fingers I have (in the air)” to prove that a witness is too far away to see properly.

We are in the middle of the theater: Giuliani does an imitation of Joe Pesci in My cousin Vinny, his “favorite avocado movie” on “how many fingers I have in the air” (he compares that to the distance at which the vote count observers)pic.twitter.com/WgmhWm616N

Highlight of the show, Rudy Giuliani struggled so hard that he had to repeatedly wipe the black marks that ran down his face. “Do you see Rudy’s fucking dye dripping all over his face?” », Asked live a community manager of Donald Trump on the video of the official stream, without realizing that his microphone was on.

Here is the live video taken from Trump’s official channel, with this dialogue from CMs:
– Can they hear us on the stream?
– I do not believe
– Do you see Rudy’s fucking dye dripping all over his face? pic.twitter.com/7FLFOMbX8G

According to essential fact-checking of the New York Times, it would actually be mascara applied to graying temples just before the conference.

And we got to the point where Rudy Giuliani is getting so restless that he’s apparently sweating hair dye. pic.twitter.com/F1DvQLHvwV

Sidney Powell, one of the other members of the American president’s judicial elite taskforce, has doubled the bet on the Canadian software Dominion Voting system, used by many voting machines, insisting that there had connections between another IT company, Smartmatic, Hugo Chavez and George Soros. Both companies have rejected his claims. But the affidavits she presented simply assert that such machines can be hacked, not that they have been. The American cybersecurity and security agency has also said that the presidential election of November 3 was “the safest in the history of the United States.”

Hours later, the recount in Georgia confirmed Joe Biden’s victory. Rudy Giuliani promised to file an appeal Friday morning to prevent the certification of official results. After this press conference and the failure of the “Four Seasons Total Landscaping” 10 days ago, a simple press release would probably be preferable.