“My little leaves” plants its small seeds directly in store 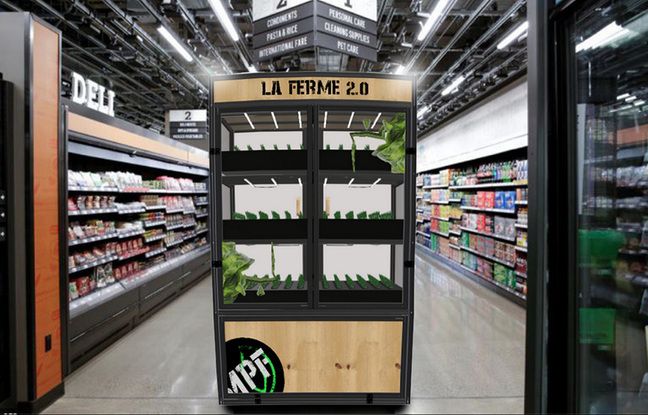 Ultra-direct sales. The French have an increasing tendency to favor the short circuit in the choice of their food products. A virtuous “fashion” to which producers try to cling to by praising local production. Thus, for example, we have seen the development of farm drives, where you can do your shopping at the farm. Based on this principle, the start-up Mes Petites feuilles, based in Lille, does better or, at least, differently, by growing its products directly in stores.

Being eco-responsible right down to your plate requires a mindset and discipline that are sometimes undermined by desires for elsewhere or for the off-season. The solution for not eating tomatoes with a catastrophic carbon footprint, the green tech start-up “My Little Leaves”, incubated at Euratechnologies, is working on it. “Our initial project was to develop connected planters for individuals, a kind of gadget. Then the confinement opened our eyes to food waste. We had the idea of ​​creating a vertical farm to set up directly in supermarkets, ”explains Jérémie Delbart, engineer and co-founder of the start-up.

“Everything that is already done in soil-less agriculture”

Their vertical farm looks like a big cabinet that works completely autonomously and in which different products can be grown: “For now, we are limiting ourselves to aromatic plants. But we can cultivate on these farms almost everything that is already done in soil-less agriculture, ”says the young entrepreneur of 27 years. Tomatoes, salads, vegetables, fruits, basically anything that is not a plant or a tuber. So no more carrots and potatoes, but welcome strawberries or melons.

The concept is eco-responsible in several ways. Already, this cancels the transport part of the products since they are grown at the point of sale and the customer picks them himself. “The algorithm that manages plant growth also delivers the right amount of nutrients for optimal growth. The use of fertilizers is very limited and there is no need for pesticides, ”continues Jérémie Delbart. In terms of production, Mes Petites feuilles relies on smaller but more frequent harvests than for traditional agriculture.

From functional prototypes, the start-up has moved on to the design of successful farms. We could also see them appear at the end of the month in a large distribution brand with which a contract is being finalized. It will initially be with aromatic plants. Within two or three years, My Small Leaves hopes to have greatly diversified its range by continuing the development of its 2.0 farm.