“My work has become monotonous and repetitive”, regrets Aurélie, whose passion-profession has been turned upside down. 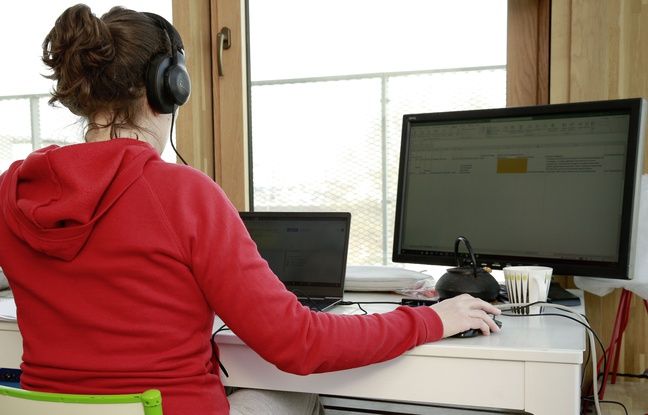 It is 4.30 p.m., the winter sun is already fading above Lake Enghien. Aurélie * joined us after finishing her working day, which started at 6 a.m. Like every day of toil since the first confinement, it seemed much longer than usual. Longer than before the coronavirus.

“My work has become monotonous, very repetitive,” breathes the young woman, bundled up in a black coat. Customer advisor for an airline for three years and “passionate” about her job, the Parisian woman today comes to consider changing jobs.

“From the first day of confinement, it was the slap”

While containment is imminent, on March 16, “it’s the action of the uproar”, she recalls as she surveyed the banks of the lake located in Val-d’Oise, a few minutes by car from her. apartment in Epinay-sur-Seine. “We received an email telling us to urgently come and get a computer to telework”. Aurélie turns around on the ring road and picks up a position at the call center in the northern suburbs of Paris. She will thus be one of the equipped employees who will not stop working during the last nine months. “More than half of my colleagues did not have a teleworking computer and were put on short-time work. We were largely understaffed ”. And this while the activity exploded: “the first day of confinement, I connected at 6am, and I saw that we already had 200 calls on hold. It was the slap ”.

And the start of a new professional life. Installed in her living room, then in her laundry room, with a husband also teleworking in the apartment, the 26-year-old woman makes phone calls, but also coffees and other energy drinks, for hours. On the phone, hundreds of customers, “often disagreeable. But I can understand them, because some people waited up to two hours before having an advisor on the device ”.

All ask for the cancellation of a ticket and its refund, or a postponement of the flight. “They had a lot of questions, and we had quite a few answers. For some, the sums at stake were substantial “, recalls Aurélie, who recites the” shouting customers “or” the mothers in tears when we tell them that we do not know when they will be reimbursed “… These last nine months have passed like an endless, “exhausting” day. “We get up, we connect, we take a break to eat and we continue until the end of the day. Then we have dinner and we go to bed ”, sums up the young woman, who almost systematically uses the“ one ”instead of the“ I ”, with a certain form of modesty.

Routine and monotony lengthen Aurélie’s days. “Before, my tasks were varied, ranging from tailor-made travel arrangements for premium customers to ticket modification, invoicing, after-sales service, call management and also social networks … For months, I have been facing the same requests, I use the same codes [informatiques], I say the same sentences on the phone, it’s very repetitive. It feels a bit like Charlie Chaplin in Modern times “, Evokes this fan of cinema and series.

Added to this are overtime, which is inevitable given the increase in customer demands (up to 430 calls waiting for its service, a record) and the drop in staff due to the lack of computer equipment. “Even at night, it worked on me. I have already logged in to check something ”. And like many teleworking employees, Aurélie is exhausted by her exponential screen time. “We are a bit of customer sponges,” she adds. Sometimes you want to cry for one of them, ”but some days the empathy wanes. In November, 58% of telecommuting employees declared themselves in psychological distress, according to an OpinionWay survey for Empreinte Humaine, and one in two teleworkers struggled to forget the work at the end of their day.

“It plays on the nerves”, continues Aurélie, who has not spoken of her suffering to anyone in her entourage. “My husband also had a lot of stress caused by his job, my colleagues were in the same boat as me …” This feeling of belonging helps him to hold on, despite the “disturbed” sleep and the anxiety of the next day. “If we let go, if we went on sick leave, we knew that colleagues would have even more calls”, continues the young woman, very attached to human exchanges. Occasionally, a telephone exchange with a “nice” customer the “shark” and “gives him a smile”.

She hesitates to retrain

During the second confinement, his employer was able to anticipate and equip all his employees with computers to telework “We were able to manage the excess calls”. But the monotony has not been stopped. Torn between the love of her job as it was before the crisis and the desire to retrain, Aurélie finds it difficult to project herself professionally. The plan to start a family has also been “put on stand-by”. “For the moment, I try to concentrate on the present moment and not to worry.” Her remedies: music to “be in her bubble”, movies and series with her husband “to travel a little”, and parts of Among Us [un jeu en ligne] with his colleagues, but “not to mention work”.

While waiting for better days, the young woman relies on Christmas holidays with her family to “recharge the batteries”. She knows she won’t be raised this year. “Management tells us that they would like to make a gesture, but that the company’s situation is too critical. Is it sincere or will our work be forgotten? »She wonders after going around the lake.

* The first name has been changed. In addition to this, you need to know more about it.