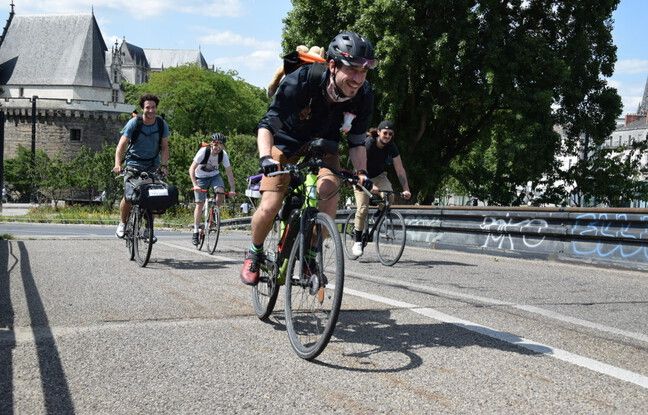 Could containment be good? Since the country was put under cover, the activity of the Nantes-based company Naofood has increased significantly. The concept was born a year ago, when twelve fellow couriers working in companies such as Deliveroo and Uber Eats decided to create their own model. “At the time, our situation was not in line with our expectations. We wanted to do our own thing, ”says Guillaume Blanchet, the founder of the platform.

This 29-year-old young man from Nantes, in search of something new, took his friends on the Naofood adventure: a Nantes-based, alternative and local meal delivery company, which only operates by bicycle. “I wanted Naofood to be based on a social and solidarity economy,” says Guillaume. Launched in November 2019, with its early beginnings, the platform, for two months, has finally found its marks.

A project that “makes sense”

“At the beginning, we delivered three orders a day, it was very fragile. Then, we went to ten, ”smiles Guillaume. The idea in which he has invested all his savings today brings together twelve delivery people and fifteen downtown restaurants who are partners in the project. A race costs 3.5 euros and allows a small solidarity contribution: 2% of the price of the customer’s order goes to three associations: La Tricyclerie, Les Griffres de l’Espoir and Bio-T-Full. “We invest the customer’s heart within an order. We link humans and consumer society, ”explains Guillaume.

The couriers, who are self-employed, want the company to function in the long term as a cooperative and participatory society (SCOP). “You have to see it as a small garden,” says Guillaume. I planted the first seed and today it is starting to grow. “

“In Nantes, there is really a good breeding ground for projects like Naofood to grow. It’s really contagious ”, smiles Guillaume, alias“ scrat ”(the hyperactive squirrel of the film The Ice Age). Just like his plush, Guillaume is full of energy and has trouble masking his excitement. “We had great feedback. The soft toys that we hang on our backpacks during deliveries are our mascots. It makes people laugh, it’s great! »He exclaims.

To select their restaurants (they pay a 24% commission to Naofood), delivery people have very specific criteria: taste, location, ethics, people, locality. “We want to taste and validate the best restaurants of each type in Nantes. It is a guarantee of quality for customers, ”argues Guillaume.

“We are going to ride the wave the right way”

With the re-containment, the Nantes team saw its orders “explode”. “We have almost 35 orders a day, that’s great! », Rejoices Guillaume. Since this new halt in the economy and in particular restaurant owners, Guillaume and his team have decided not to take 24% but 15% of commissions from restaurants. “We want customers, through Naofood, to support restaurants so that they survive and be there tomorrow. With this new confinement we are surfing a wave that is not good but we will do everything to surf it in the right way. “

The new platform wants to become a “quality benchmark” for customers and the energy of its founder seems limitless. “We are still very young and we have to professionalize ourselves. But we will not let go. “