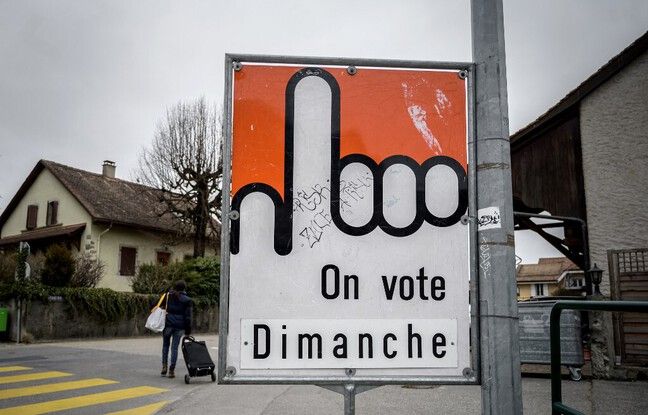 The initiative to ban hiding one’s face in Switzerland, which targets the few women who wear the niqab in the country, appeared to be heading for a narrow victory on Sunday. The latest projections from the gfs.bern institute at 2:00 p.m., two hours after the close of polling stations, and those of the Audiovisual Service gave 52% but with a margin of error of two percentage points. To be adopted, the anti-burqa initiative must obtain the majority of the votes of the population but also win the majority of the cantons.

The two other initiatives submitted to the ballot on Sunday give the yes to a trade agreement with Indonesia (51%) but reject the introduction of a federal electronic identity (64% of no). If the yes were to be confirmed for the anti-burqa initiative, Switzerland would join France, Austria, Bulgaria, Belgium and Denmark in banning the full veil, after years of debate.

“Banalize the xenophobic and racist atmosphere”

The text proposed by the populist party of right UDC evokes neither the burqa – a kind of long piece of fabric which covers the women from head to toe and provided with a mesh slit at eye level – nor the niqab, which covers body and face entirely with the exception of the eyes, but the campaign posters leave no doubt as to the intent. “Stop radical Islamism” or “Stop extremism”, can we read on the posters which show women in niqabs.

The yes risks “trivializing the xenophobic and racist atmosphere” against Muslim women, declared Myriam Mastour, member of the Les Foulards Violets collective and of the feminist strike on the public channel RTS. On the other hand, she is delighted with the small difference between the yes and the no, while the first polls gave the SVP’s initiative largely preferred.

“It’s a huge relief,” said Mohamed Hamdaoui, member of the Bernese Grand Council and founder of the “A face discovered” campaign to the ATS agency. “This vote is indicative of an awareness,” according to this member of the PS, who claims to be a secular Muslim. It was “the opportunity to say stop to Islamism” and not “to Muslims, who obviously have their place in this country”.

Two cantons already have a ban on covering the face. The federal government and parliament opposed the measure, arguing that the initiative addresses a problem that does not exist. In 2009, the Swiss voted to ban the construction of minarets on mosques, provoking anger in Muslim countries and the approval of European nationalist parties.

People also seem to have given a trade deal with Indonesia a small advantage. The largest Muslim country in the world is a huge and very promising market, but it is palm oil – with a controversial ecological reputation – that is the focus of the debate and has sparked a popular initiative from opponents. This agreement provides for the abolition of customs duties on a large part of the products traded with Indonesia as well as a set of rules governing trade in services, intellectual property and investments.

Opponents criticize deforestation, violations of human rights and the environment, but also the criteria for the certification of palm oil themselves, contained in the agreement. The final results are expected in the middle of the afternoon.